Stocks bounced back on Tuesday after China announced plans to change the peg of the Yuan with the U.S. Dollar. The move came after the U.S. Treasury called China a currency manipulator. In after hours trading last night, S&P futures were down approximately 1.5%. By this morning the same futures were up over 1.o%.

All four main sectors moved higher on Tuesday with the Nasdaq leading the way with a gain of 1.39%. The S&P tacked on 1.30% and that was the second best performance. The Dow gained 1.22% and the Russell moved up 0.99% to round out the gains.

Nine of the 10 main sectors moved higher on the day and eight of them gained at least 1.0%.

The financial sector led the way with a gain of 1.69%.

The tech sector was close behind with a gain of 1.68%.

The energy sector was the lone sector to lose ground and it only lost 0.14%.

The materials sector gained 0.14% and it was the lone gainer not to reach a gain of at least 1.0%.

My scans made a huge shift to the bullish side last night with 111 names on the bullish list and only one on the bearish list.

As I mentioned in yesterday’s article, there were a great number of stocks in oversold territory so the turn higher helped produce the strong positive reading.

The barometer jumped from 3.9 to 51.2 once these results were added in to the equation.

There were a number of stocks with solid fundamentals to choose from on last night’s bullish list. There were also a great number of financial stocks on the bullish list and so was the Financial Select Sector SPDR (NYSE: XLF). As is the case most times when I get an ETF on the list, I ran the XLF through the Tickeron Trend Prediction Engine. There was a bullish signal generated on August 5 and past predictions on the ETF have been accurate 80% of the time. 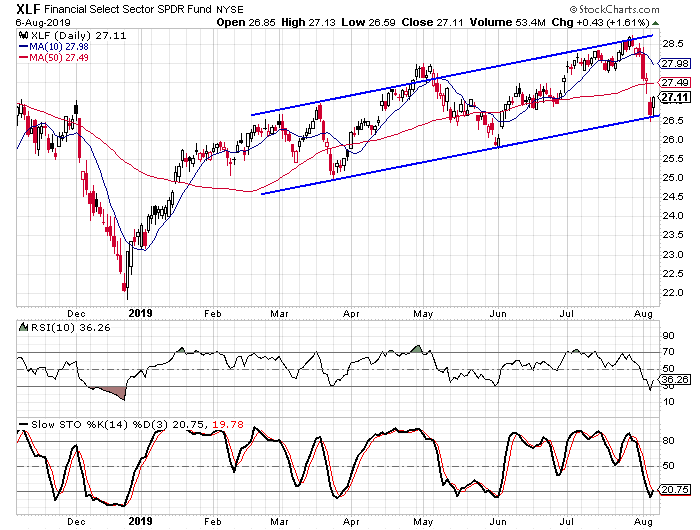 Looking at the chart for the XLF we see that it has been trading within a trend channel over the last seven months and it just hit the lower rail of the channel. The stochastic readings were in oversold territory and just made a bullish crossover last night. I look for the ETF to move back up to the upper rail in the coming weeks.

Buy to open the September 26-strike calls on XLF at $1.70 or better. These options expire on September 20. In order for these options to double the ETF will need to reach $29.40. The upper rail of the channel should be up above that price level in the next few weeks. I suggest a target gain of 100% with a stop at $26.45.