Stocks came under fire once again on Monday and the losses were significant. In fact it ended up being the worst losses of the year. The Nasdaq took the biggest hit with a drop of 3.47% and the Russell joined it with a loss of 3.02%, making them the only two of the four to lose over 3%. The S&P fell 2.98% and the Dow took the smallest loss at 2.9%.

The selling was primarily fueled by increased rhetoric between the U.S. and China and the ongoing trade war.

All 10 of the main sectors fell on Monday with varying degrees of losses.

There were four sectors that fell over 3% and they were led lower by the tech sector which dropped 4.14%.

As for the smallest losses, the utilities sector fell 1.43% and that was the best performance.

The materials sector dropped 1.88% and it was the only other sector that didn’t lose at least 2%.

My scans turned in another positively skewed result on Monday with 15 names on the bullish list and four on the bearish list. The sixth straight day of selling has put the majority of stocks in overbought territory or at least close to it.

The barometer actually moved in to positive territory after these results were added in to the equation. The final reading was 3.9, up from -1.6. 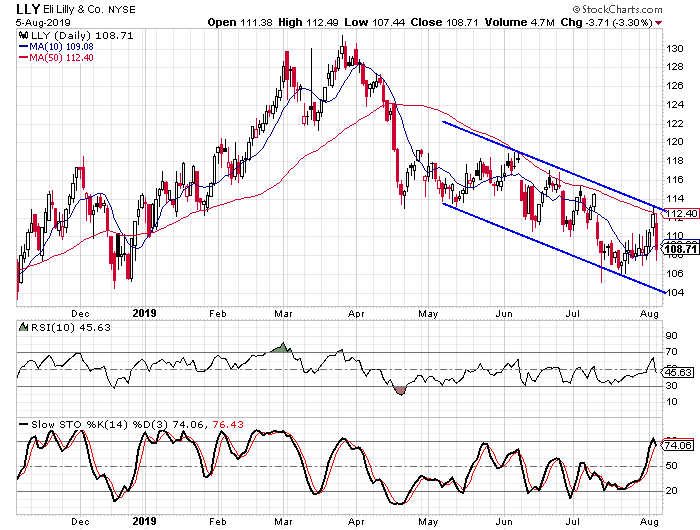 The chart for Lilly shows a downward sloped trend channel forming over the last few months and the stock is right at the upper rail of the channel at this time. We also see that the stochastic readings hit oversold territory and made a bearish crossover last night.

Buy to open the September 110-strike puts on LLY at $5.15 or better. These options expire on September 29. In order for these options to double the stock will need to drop to $99.70. The stock will need to break below the most recent low, but given the trajectory of the channel, it won’t take long for the lower rail to be below the $100 level. I suggest a target gain of 100% with a stop at $112.00.