The employment report came in right at the estimate, but that didn’t help investors get over the new tariffs announced by President Trump and the selling carried over to Friday. All four of the main indices fell again as a result.

All 10 of the main sectors fell on Friday, but the range of results was rather wide.

The two defensive sectors of utilities and consumer staples both fell 0.02% and those were the best performances.

There were three sectors that declined more than one percent and they were led by the tech sector which dropped 1.63%.

The second worst performance came from the energy sector which fell 1.44%.

The materials sector lost 1.17% and was the third one of the bunch.

Despite the fifth straight day of selling, my scans actually turned positive on Friday. There were 17 names on the bullish list and only seven on the bearish list.

The barometer continued to climb toward positive territory, but came up just short of making it. The final reading was -1.6, up from -14.6 on Thursday.

Of the 24 stocks on the two lists, the one that stood out the most was McDonalds (NYSE: MCD). The stock appeared on the bullish list and the EPS rating is solid at 68, but there isn’t an SMR rating. The reason for that is that there isn’t a calculated return on equity. I looked on three different sites and none of them had an ROE for the company. Regardless, several other fundamental factors were strong including the profit margin of 38.3%. 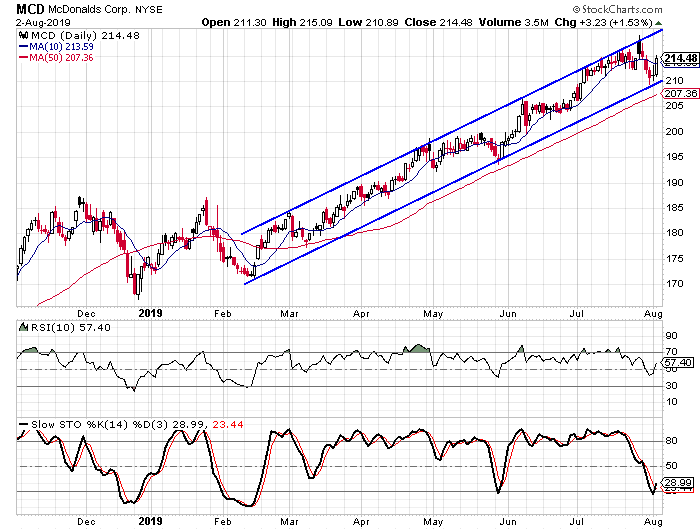 The chart for McDonalds really jumped out at me. We see a very tight and well defined trend channel forming over the last six months. The lower rail connects the lows from February and May and the stock just hit it again this past week. The company announced earnings on July 26 and peaked on that day. The little pullback in the past week caused the stochastic readings to drop in to oversold territory, but the indicators made a bullish crossover on Friday.