Business at Dow Inc. (NYSE:DOW) is complicated. And a recent earnings report may have clouded those prospects even more. But the trade of profiting from DOW stock is as straightforward as it gets for today’s bullish investors looking past yesterday’s news. Let me explain.

Dow’s second quarterly confessional as a standalone, but highly complex company, didn’t win it any new fans on Wall Street. The “we-do-it-all” style entity and one-third of the former DowDupont company announced mostly in-line, but decidedly weaker earnings and sales.

By the numbers DOW stock offered a 39% profit drop on earnings of 86 cents.

At the same time, sales slid by 14.3% and narrowly missed consensus forecasts by 2.5% on revenues of around $11 billion.

Behind the weak results, Dow’s management cited, challenging conditions due to the U.S.-China trade war and a slowing global economy.

Obviously, the blame is far from a surprise for DOW stock, which has three operating and six business units that have their hands in everything from infrastructure, packaging, consumer products and technology.

Okay, but where does that leave Dow shareholders? Investors might take refuge in the fact the company remains a healthy and durable constituent of the Dow Industrials alongside the likes of Coca-Cola (NYSE:KO), Microsoft (NASDAQ:MSFT), Disney (NYSE:DIS) or a JPMorgan Chase (NYSE:JPM).

But even better, DOW stock is offering today’s investors a financially well-supported, steady and generous income stream of 5.79%. Additionally, as the payout is also built on a potentially sturdy-looking price chart, it’s time to look past yesterday’s news and buy shares today. 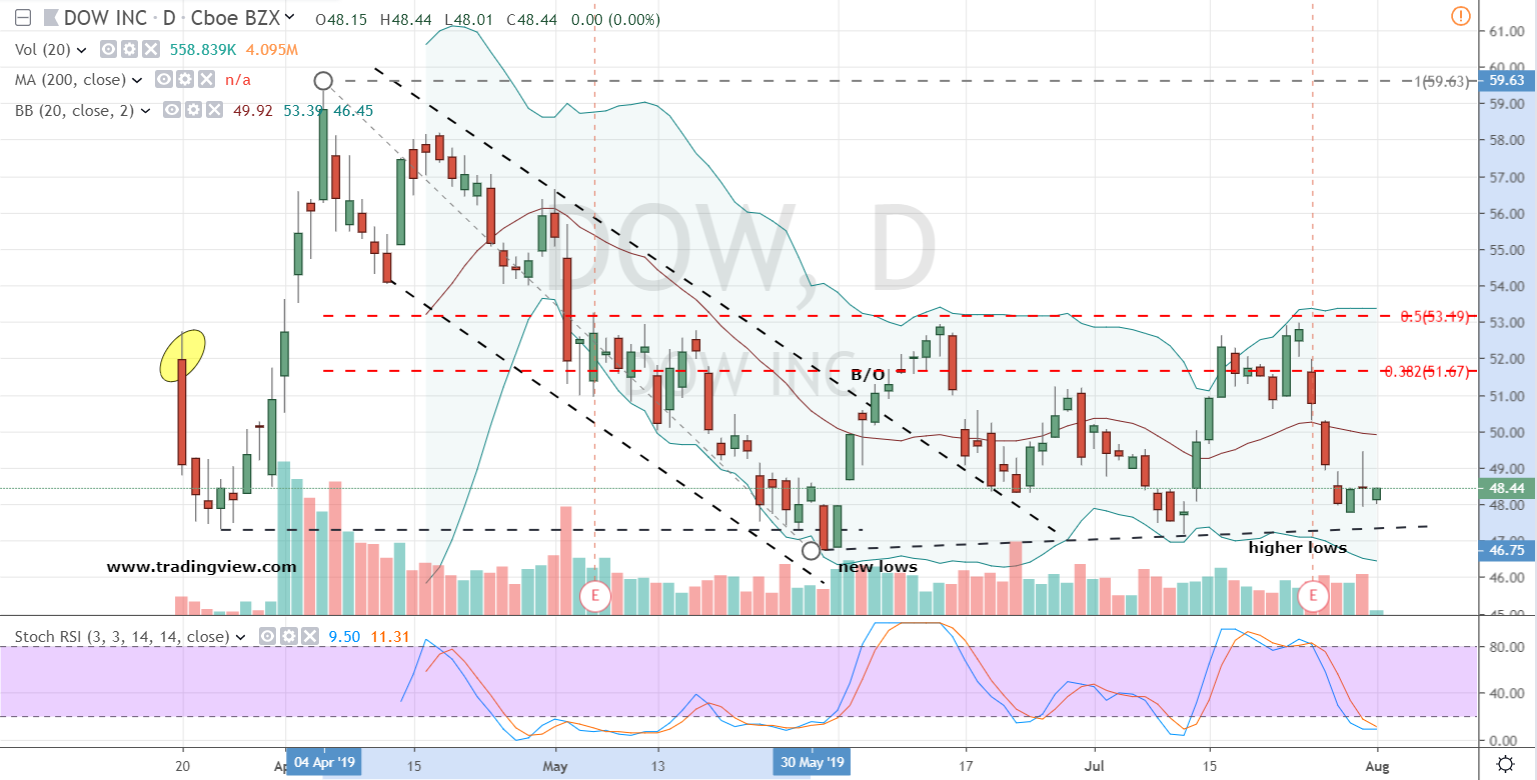 There was a time not so long ago when the price action in DOW stock was looking ominous as shares channeled their way to new lows. And truthfully, I was bearish at the time. But the underlying conditions have changed to afford a more optimistic outlook for Dow as an investment.

A breakout of DOW’s downtrend has gone on to establish a series of slightly higher highs and higher lows. This could be the start of a larger uptrend. Suffice it to say, that would be bullish for investors buying Dow shares today. With a favorable oversold condition in Dow’s stochastics, buying on weakness looks even better.

Be warned though, there is another way to read the DOW stock price chart, which also deserves attention.

Investors could argue Dow is simply in another channel pattern that’s simply flatter and precariously near the stock’s all-time-lows. Obviously, it would be hard to disagree with that observation. It’s also more of yellow flag cautioning against buying DOW stock.

Further, given the formation’s highs have been stymied between DOW stock’s 38% and 50% retracement levels, this perspective could deserve more weight than the one eyeing an uptrend and a good spot to take advantage of capital appreciation and income.

The bottom line? Both realities exist. It’s also true investors taking on a position in Dow Inc can’t have it both ways at the same time. So, if you’re looking to buy DOW stock today, my recommended strategy is hope for the best, but prepare for the worst. And on today’s price chart, that approach amounts to pretty straightforward business of risking a little to gain a lot.