After the post-Fed fall Wednesday afternoon, stocks rallied back Thursday morning and had erased almost all of the losses from the day before. That was until 1:25 PM EST when President Trump tweeted that the U.S. would place new tariffs on Chinese goods. The market gave up all of the gains within 10 minutes.

We saw eight sectors fall on Thursday while two managed to gain ground.

The utilities sector led the way with a gain of 1.02% and the healthcare sector squeaked out a 0.10% gain.

The energy sector fell 2.3% and that edged out the 2.27% drop by the financial sector for the worst performance.

The industrial sector fell 1.95% and the consumer discretionary sector dropped 1.36%.

Those were the four sectors that fell more than one percent on the day.

My scans produced another negatively skewed result last night with 18 names on the bearish list and nine on the bullish list. I was actually a little surprised that they weren’t more negatively skewed than that.

Despite the negative skew from the scans, today’s trade idea is a bullish one and it is on Intercontinental Exchange Group (NYSE: ICE). The company has good fundamental ratings with an EPS rating of 87 and an SMR rating of a B. The company announced earnings yesterday and beat estimates on both the top and bottom lines. 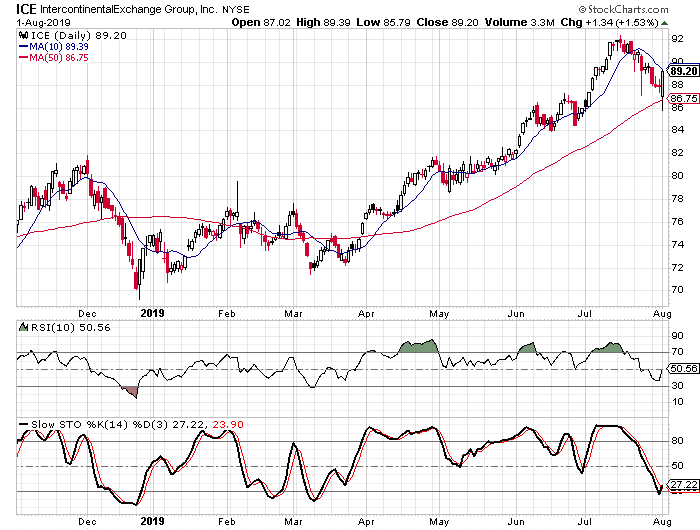 The chart shows how the stock has been trending higher over the last four months and how the stock had dipped over the last few weeks. The stock dipped in early trading, but reversed course and ended the day considerably higher even as the market moved lower. It seemed to find support at the 50-day moving average and the formation from the candlestick bar was called a bullish engulfing pattern.

Buy to open the September 87.50-strike calls on ICE at $4.00 or better. These options expire on September 20.In order for these options to double the stock will need to reach $95.50. To reach that level the stock will need to break to a new high, but based on previous moves after the stochastic readings were oversold, I think it can get there. I suggest a target gain of 100% with a stop at $86.50.