Stocks were just sort of prodding along for the first part of the day yesterday—not moving up too much, not moving down too much, and then bam. The Fed announced a rate cut of 25-basis points and that was what most everyone expected. Unfortunately there was a press conference after the meeting and some of Chairman Powell’s comments spooked investors.

All four of the main indices moved lower after the meeting and all four ended up in the red as a result. The Dow took the biggest hit at -1.23% and it was followed closely by the Nasdaq which fell 1.19%. The S&P dropped 1.09%, but the Russell managed a much smaller loss at 0.41%.

All 10 of the main sectors dropped on Wednesday as well.

The consumer staples sector took the worst loss at -1.98%.

Overall there were five sectors that fell over one percent.

My scans flipped once again and produced a negative skew once again.

There were 28 names on the bearish side of the docket and 11 on the bullish side.

The barometer changed very little once these results were added in to the equation. The final reading on Wednesday was -21.2 after a reading of -23.6 on Tuesday.

Even though there were a decent number of stocks between the two lists, there weren’t a lot of scenarios where the chart and the fundamentals matched up and got my attention. The one setup that caught my eye the most was on Steel Dynamics (Nasdaq: STLD). The company appeared on the bearish list, but its fundamentals aren’t that bad. The EPS rating is a 63 and the SMR rating is a B. However, those ratings were much higher not that long ago and that suggests that things are getting worse for the company. 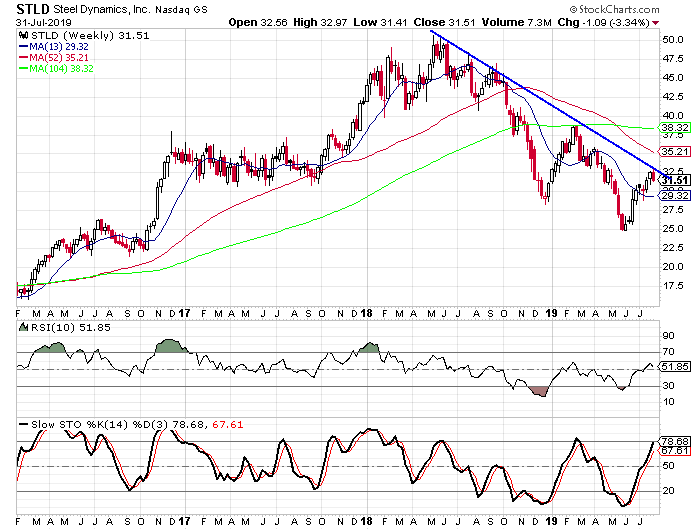 The weekly chart for Steel Dynamics shows how the stock has been trending lower for about a year now. We see a trend line that connects the highs from various points from the past 12 months and the stock is hitting it now. We also see that the weekly stochastic readings are just below overbought territory.