It’s been said there’s always a bull market somewhere. But if you want to catch this type of trend as its emerging on the price chart, there may be no better spot than in silver. And the smarter way to capitalize on this cycle is buying leadership in silver stocks Wheaton Precious Metals (NYSE:WPM), Pan American Silver (NASDAQ:PAAS) and First Majestic Silver (NYSE:AG).

Silver has earned a reputation as the proverbial ugly sister of gold. And in recent years that label has been rightfully earned. Performance wise, the iShares Gold Trust (NYSEARCA:GLD) recently broke above its key 2016 high.

At the same time, the iShares Silver Trust (NYSEARCA:SLV) is about 23% below that year’s high-water mark.

The under-performance doesn’t stop there either.

Right now GLD stock is also roughly 27% from its high in 2011 which immediately preceded a lengthy bear market for the precious metal.

And unlike gold, silver is still in the grips of this menacing force.

Markets do however rotate through both bull and bear cycles.

Some may take their time, but it’s a universal truth. What’s more, those winds of change are blowing for silver stocks following May’s higher low pattern in the commodity and this month’s breakout of downtrend resistance dating back to the 2016. And that’s even better news for market-leading silver stocks WPM, PAAS and AG stock.

But to position more smartly, it’s time to locate entry points in these silver stocks which offer bullish exposure with less risk and stronger upside potential. 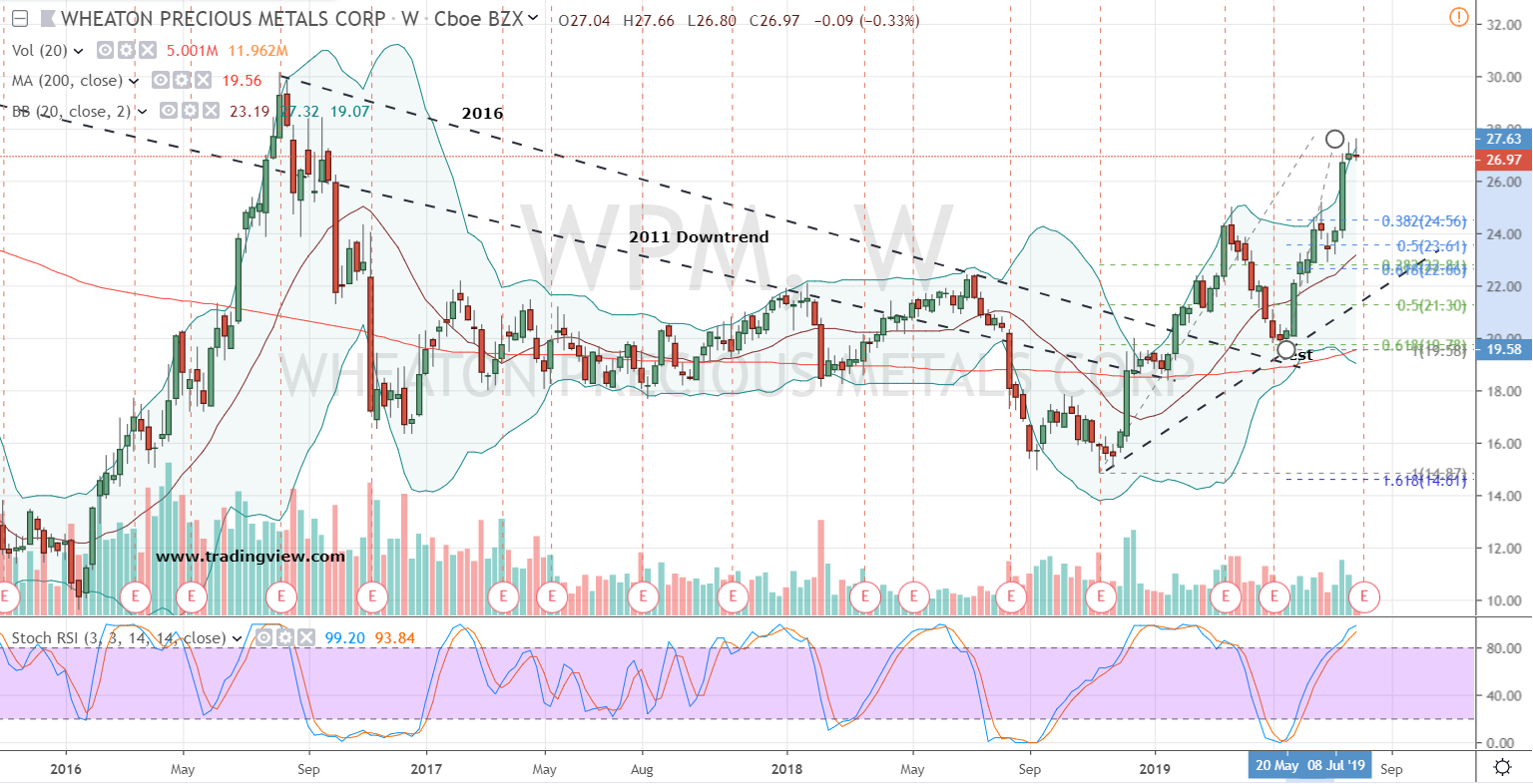 Wheaton Precious Metals is the first of our silver stocks to buy. WPM stock has displayed relative strength during all of 2019 and there’s little reason to think this trend won’t continue. After breaking out and subsequently successfully testing downtrend resistance dating back to 2016, WPM has continued to rally strongly to fresh relative highs.

The provided weekly view of this silver stock does a good job of displaying WPM’s technical wherewithal. However, a candle topping pattern and overbought situation suggests a pullback is likely and hence, buying into weakness is the strategy of choice.

Put WPM stock on the radar for a pullback entry. Ideally, a decline in price will result in this silver stock moving into the area from $23 – $24.50 which has multiple layers of Fibonacci and trendline support. A price drop of this size should also neutralize today’s overbought condition. I’d suggest using a confirmed weekly low in shares for exiting and taking initial profits as shares rally to challenge 2016’s high. 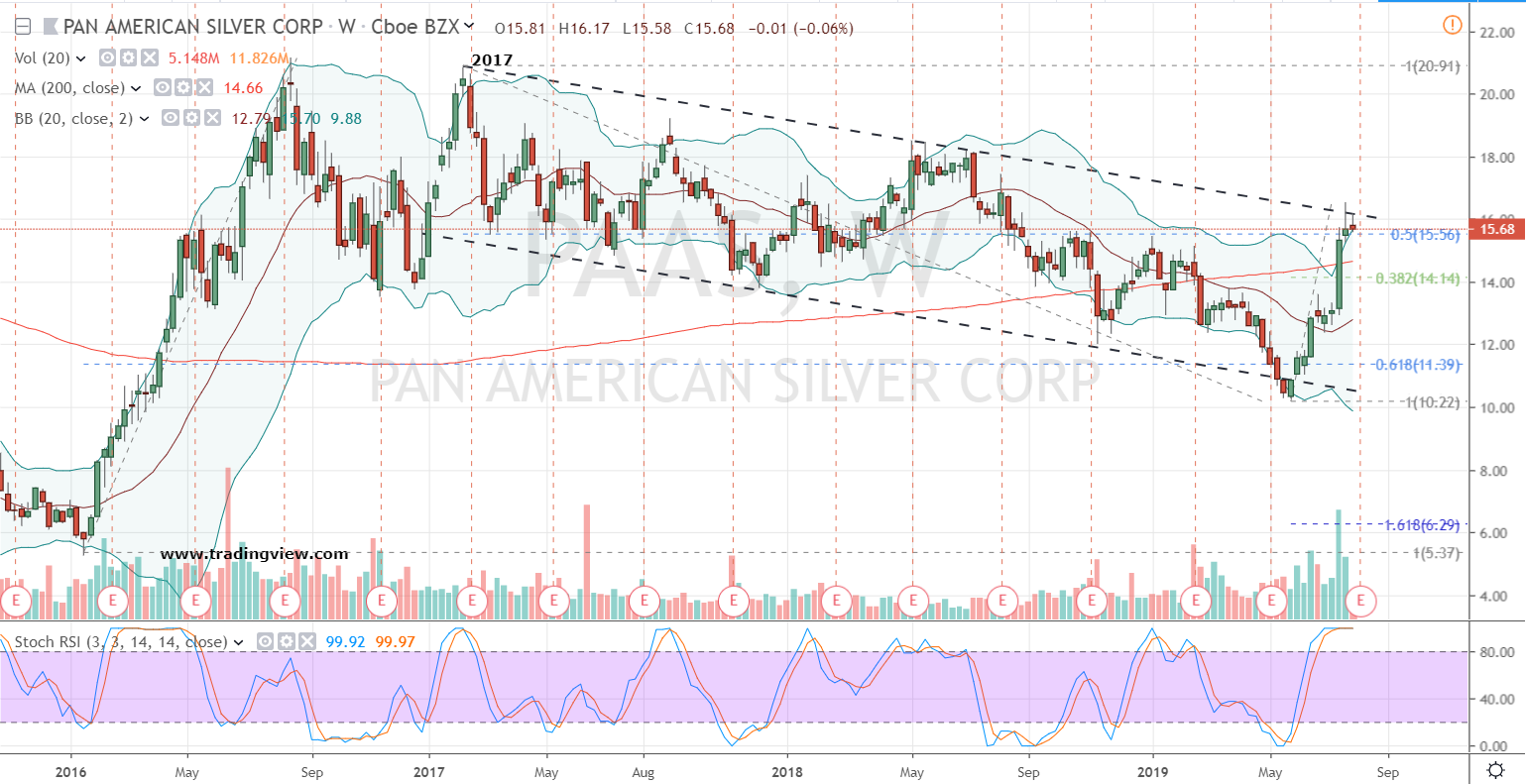 Pan American is the second of our silver stocks. Unlike WPM, shares haven’t broken out above trendline resistance. But PAAS stock is interesting as it displayed relative strength back in 2017 by challenging 2016’s ubiquitous high when other silver stocks were sinking.

Since that period of outperformance PAAS has put together a downward sloping channel. Shares are now stationed up against resistance. However, they’ve also broken above the 50% retracement level from the 2017 high. Given a bit of additional consolidation work and maybe a chance for its own overbought conditions to be worked off, this silver stock looks good to stage a meaningful breakout.

Buy this silver stock on a breakout. Maybe PAAS’s overbought conditions will ease before a trigger, but sometimes overbought conditions beget more of the same. This looks like one of those situations. I’d recommend using the consolidation low or up to 10% for a stop-loss to contain downside exposure. On the upside, a challenge of PAAS stock’s 2016 and 2017 highs near $21 for taking partial profits is suggested. 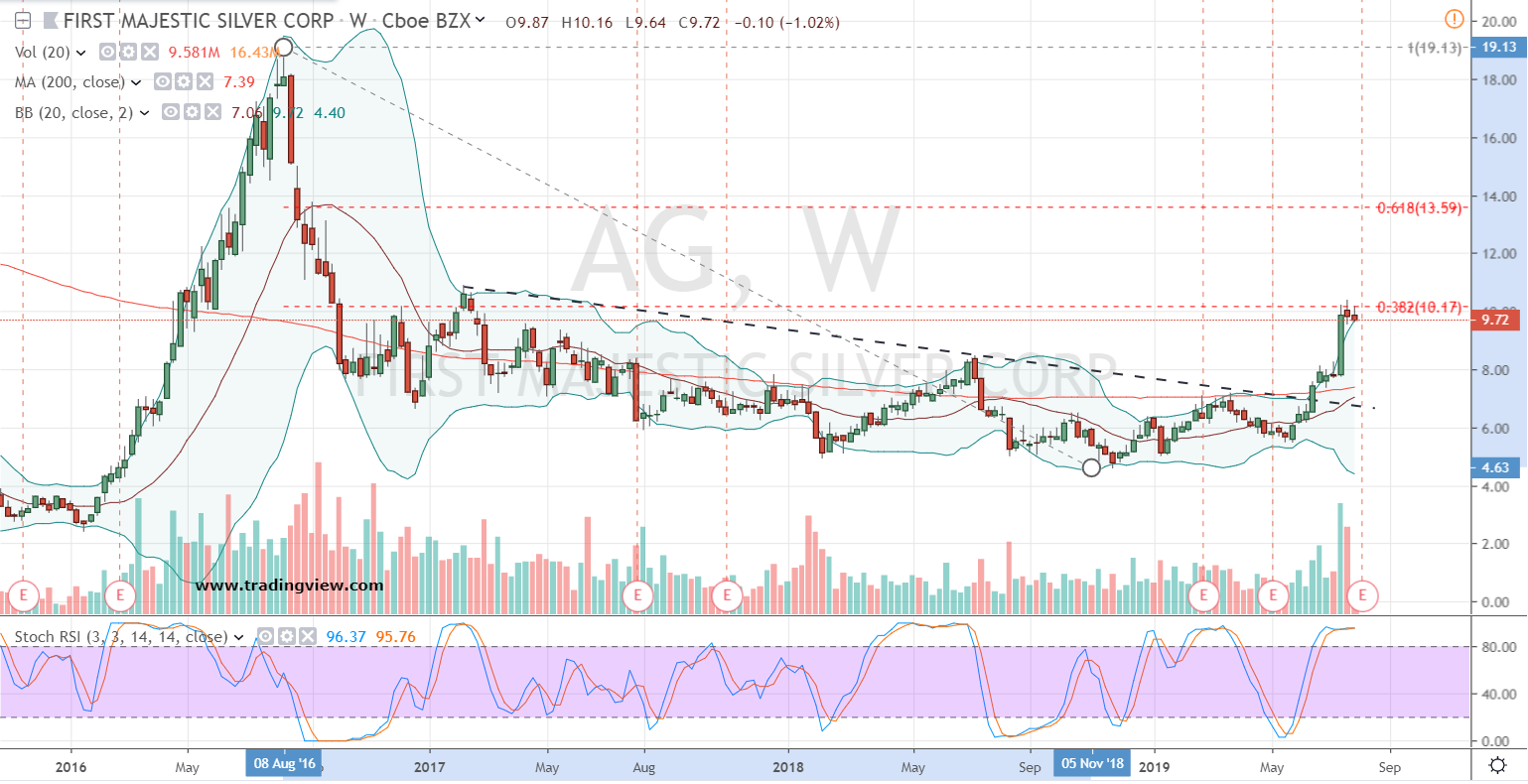 First Majestic Silver is the last of our silver stocks. In 2016, AG stock showed amazing technical leadership as shares blasted higher by nearly six-fold before crashing lower with silver and most other industry players. With AG stock I’m looking for a return of price momentum in 2019’s second half.

Currently shares of AG are testing the 2017 high which is aligned with the 38% retracement level from 2016’s cycle peak. Similar to PAAS, I’m not expecting a deeper pullback pattern to emerge. It could happen, but for now I’d put this silver stock on the radar for purchase above the high formed last week.

On the upside, I’d be aware of the $12.00 area as the 50% retracement level comes into play. However, with AG stock above its 2017 peak and the decline from 2016’s high a swift price collapse, I’m anticipating resistance won’t be any trouble until approximately $13.50 and the 62% level. That’s where I’d look to take initial profits.

For AG stock to stay on the watch list as a momentum-style breakout candidate, I’d like to see shares remain above $9.25. If this silver stock falters, the entry is off the table and waiting for a much deeper and oversold pullback to form would make sense.