A key battle line has been drawn and crossed at China’s Alibaba Group (NYSE:BABA). And for technical-based investors it’s time to enjoy the benefits of capitalism, courtesy of a long position in Alibaba stock. Let me explain.

Keeping the faith in Alibaba stock hasn’t always been easy. And it probably goes without saying that investors need look no further than the ongoing trade war between the U.S. and China as a reason to question a long position in BABA stock. But respectfully, it’s time to turn your attention elsewhere.

The fact is Alibaba stock has and continues to best investors’ concerns regarding the trade war.

This past May’s easy earnings beat, with its solid revenue and margin growth, was proof of that as InvestorPlace’s Luke Lango recently noted.

Yet shares of Alibaba and a company many rightfully view as China’s answer to Amazon (NASDAQ:AMZN) weren’t exactly quick to react enthusiastically to the quarterly confessional.

In fact, BABA stock went down hard in the report’s aftermath.

So, what went wrong?

A still-pending G-20 summit back in June certainly played a part in putting a lid on Alibaba’s earnings. BABA’s announced capital raise of approximately $20 billion via a Hong Kong shares listing has also been a point of contention. Alibaba stock bears who’ve long shouted about what they see as the diversified tech giant’s accounting shenanigans see the move as the latest evidence of financial trickery.

Nevertheless, in the face of constant headline harassment, BABA stock has moved higher.

Alibaba stock is up roughly 27% year-to-date. Not only does the performance dwarf the 14% return of Invesco China Technology ETF (NYSEARCA:CQQQ) — where the shares are the second-biggest holding, at 9.49% of the 91-stock portfolio — it’s also leading the U.S. bellwether S&P 500 index’s gain of around 20%.

And guess what? BABA isn’t finished. What’s more, shares are in position right now to make your portfolio great again or even better with Alibaba stock in it.

Alibaba Stock Weekly Chart
The week is starting off on a slightly pressured note for the markets and Alibaba stock. But the noise is offering investors an opportunity to buy shares on weakness within a much stronger-looking weekly chart poised for continued upside. 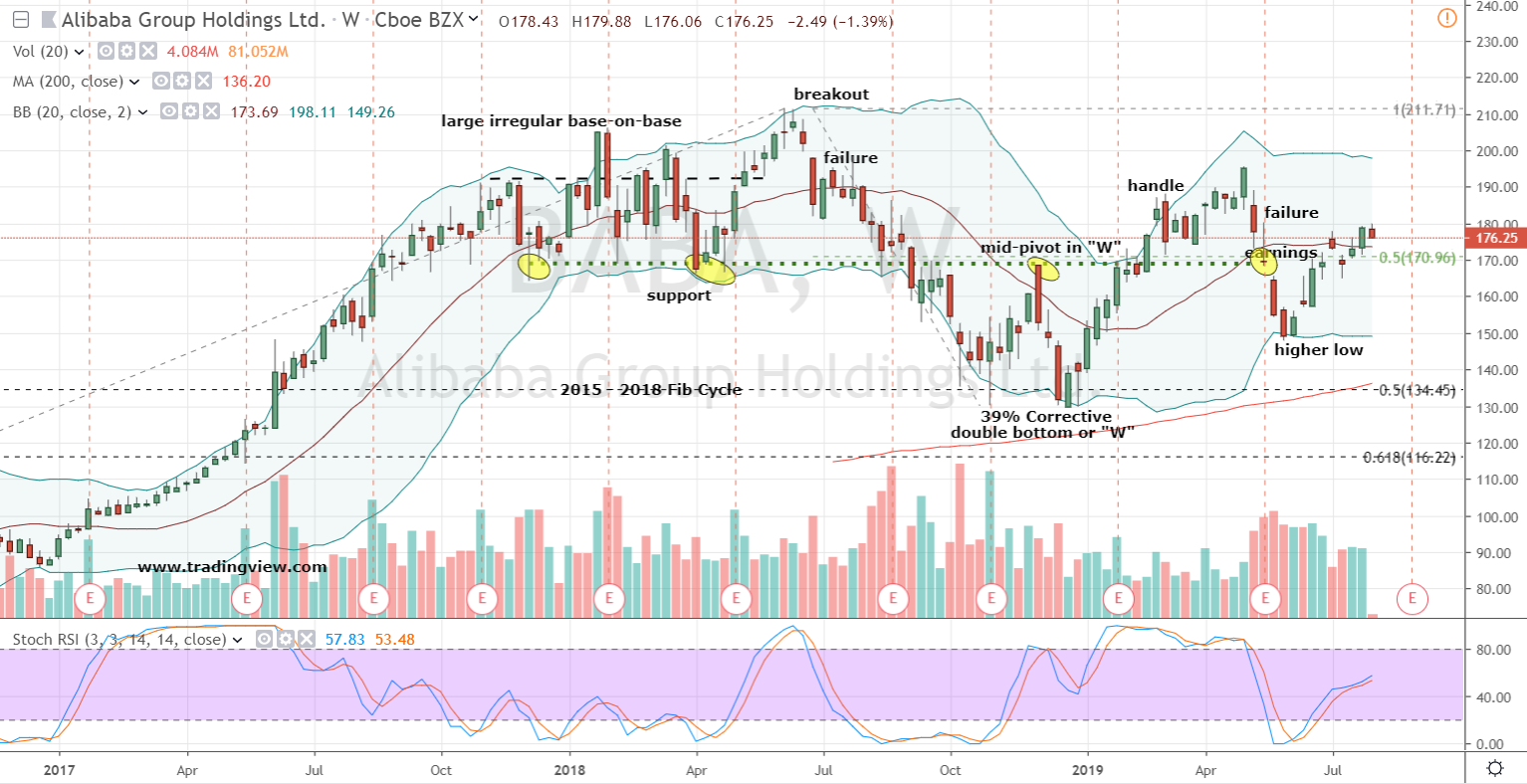 This past week Alibaba stock decisively reaffirmed the bull case after powering back above its year-long corrective base’s 50% retracement level and mostly matching pre-earnings price for a second time. In our technical determination, it’s a key battle-line won by BABA bulls following June’s confirmed higher low pattern which set the stage for a constructive uptrend to emerge.

Investors interested in going long Alibaba could always wait for additional price confirmation. I get it, but I also favor owning shares right here. With BABA marginally past this hotly contested technical zone and stochastics looking supportive after a near bearish crossover, conditions are ripe for a rally to the early May pivot high of $195.72 within the base.

With shares trading near $176 there’s roughly $20 of upside in Alibaba stock before I’d recommend taking partial profits. This compares nicely to the discussed battle line around the $170 level which bulls have overcome for a second time and a price obviously well-suited for a stop-loss if required.

Allowing for a bit of wiggle room, an exit beneath $169 means the initial reward potential on going long Alibaba stock is nearly three times as great as the risk. That’s attractive of course. But in appreciating a large corrective base showing more and more evidence of the right stuff for even bigger longer-term success, BABA is looking even better for making your portfolio great again or simply better than otherwise.