One of the hottest industries in history was the “dot-coms.” The late ’90s was the era of internet adoption, and it was huge. Many of today’s millionaires have the dot-com era to thank for their fortune.

Now, there’s a new industry on the scene that’s making headlines and minting millionaires – and it’s even more ripe with opportunity than the dot-coms were.

You can make big money fast in this veritable feeding frenzy…

But you can lose it just as quick.

In this lucrative industry, volatility is king. To generate those big, fast profits, you need to know the right way to play this market.

Options Are the Best Way to Play to Marijuana Stocks
One of the fastest-growing industries in the world right now is marijuana.

In 2017, the marijuana industry generated a whopping $20-plus billion in the U.S. alone.

The job opportunities are huge within marijuana businesses too.

The industry currently employs 250,000 people in the U.S.

The industry is booming, and investors don’t want to miss out – they poured $10 billion into marijuana last year.

To say that this is a growth industry is an understatement. It’s burning hot – literally and figuratively.

Marijuana is being embraced by all ages, races, and creeds in the U.S. and across the planet. It’s not even all the way here yet, and it’s already here to stay. It’s now legal in 33 states for medicinal use, and 10 of those states have made it recreationally legal.

And the rest of the U.S. is on track to do the same, making future growth a certainty – and a profit opportunity you just can’t miss out on. Trust me, you don’t want to be left standing on the sidelines of this white-hot industry.

Now, like the companies of the “dot- com” era, pot stocks are volatile. Moves are often exaggerated, and companies that are here today could be gone tomorrow. Historic data is limited, so picking the “right” companies can be tenuous.

Although pot is legal in 33 states, it is currently federally illegal. This keeps big U.S. players like tobacco companies tentative and chomping at the bit, ready to dive into this lucrative industry.

All of this spells one thing: volatility.

For stock traders, this means risk. But for option traders like us, volatility equals opportunity.

You see, options reduce risk and still provide unlimited reward. They also allow you to make money if the stock goes up, down, or even sideways. No matter which way the stock goes, there’s an option trade that will generate fast profits.

And the climate of the marijuana industry is perfect for picking profits. Here are a few examples…

Just over 3 weeks later, on February 19, Alpha-9 signaled an exit.

Now, that’s not bad for a stock purchase. But when you compare it to the 240% return from the option purchase, the choice is clear.

And CODI isn’t the only example. There’s even a way to invest in the marijuana industry as a whole… 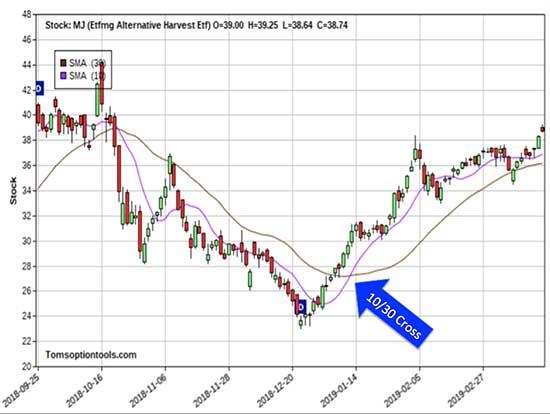 I could go on and on with examples, but you get the point…

Now, I got into cannabis investing years ago because I wanted to help my buddies – returning vets – suffering from PTSD.

Over the years I’ve made angel investments, bought shares in startup companies…

I even launched my own medical marijuana seed-to-sale operation with a doctor friend of mine.

Because I know the gains here can be extraordinary. I’m talking double, triple, even 50 times bigger gains than traditional investments (as you just saw.)

And the best part is… most investors haven’t climbed aboard yet.

That means you have the chance to jump in ahead of the crowd – before the Wall Street lemmings start piling in.