For the most part stocks moved higher on Wednesday, but the indices saw mixed results. The Dow fell 0.29% and that was due to two stocks in particular—Boeing and Caterpillar. The other three indices moved higher and the Russell led the way with a gain of 1.64%. The Nasdaq tacked on 0.85% and the S&P moved up 0.47%.

Eight of the 10 main sectors moved higher on Wednesday and financials led the way with a gain of 1.03%. The communication services sector rallied by 0.88% and that was good enough for second place while the tech sector moved up 0.83% for third.

The consumer staples sector was the worst performer on the day, falling 0.67%.

The materials sector joined staples in the red, but the drop was only 0.07%.

The scans continued to shift towards a more bullish skew with 49 stocks and ETFs on the bullish list.

There were only four stocks on the bearish list.

The positive differential of 45 was the biggest positive skew since June 4.

The barometer jumped to 29 from 14 once these results were added in to the equation.

For a fourth straight day I have a bullish trade idea for you. Today the stock is Hilton Worldwide Holdings (NYSE: HLT) and it has strong fundamental ratings. The EPS rating is an 80 and the SMR rating is an A. The company announced earnings yesterday and it beat estimates and raised its outlook for 2019. 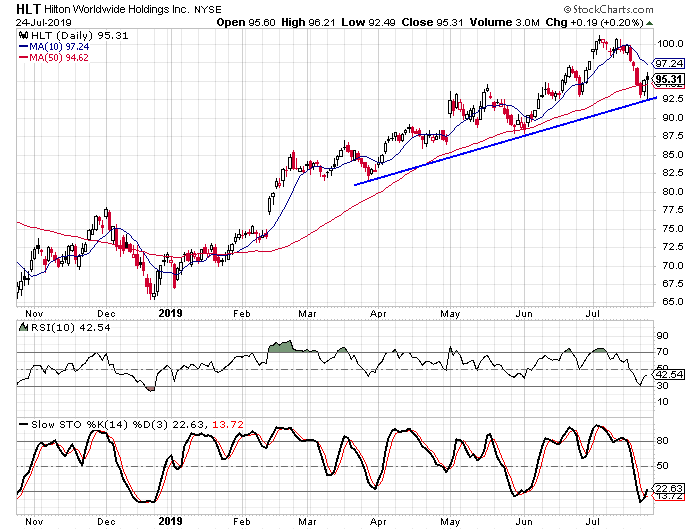 The daily chart shows how the stock has been trending higher since December and a trend line connects the lows from March and May. The stock just hit the trend line and bounced higher. The 50-day moving average is just above the trend line and the stock moved back above the 50-day as well. We also see that the daily stochastic readings made a bullish crossover yesterday.

Buy to open the September 92.50-strike calls on HLT at $5.00 or better. These options expire on September 20.In order for these options to double the stock will need to reach $102.50. That level is just above the most recent high, but I think the stock can get there. I suggest a target gain of 100% with a stop at $92.50.