The flurry of new highs notched by the S&P 500 is perhaps the clearest evidence of the decade-long golden age stocks we’ve been living in. Since the disastrous days of ’08 and bottom carved in the Spring of ’09, equities have grown 343%.

But not all companies have been boosted during the buying binge. Some sad saps remain stocks to sell.

These stocks to sell weren’t hard to find. Indeed, in a day of high flying equities tagging record-setting prices, all you have to do is look for the few stocks that are hitting new lows.

There’s a stink about them.

Maybe they have deteriorating fundamentals.

Or perhaps they find themselves in an out-of-favor sector.

In any case, they’re worth steering clear.

Or you could deploy bearish trades to profit from their pain. 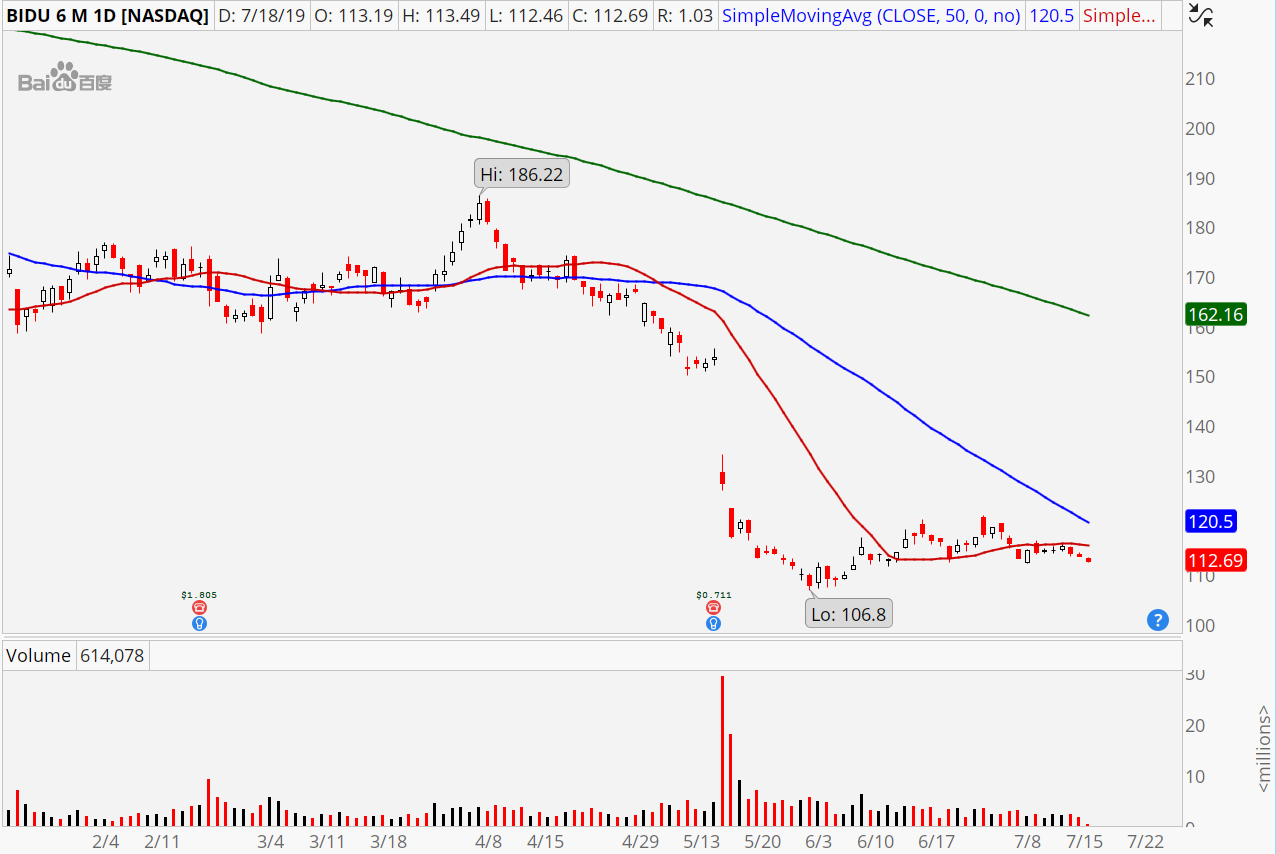 Since peaking last year at $284.22, Baidu (NASDAQ:BIDU) shares are down over 53%. The unwinding accelerated after May’s dismal earnings report sent the shares plunging around 20% amid massive volume. Since then, BIDU stock has proven altogether unable to lift itself from the mat.

And with the specter of another certain earnings announcement looming later this month, I think the selling could begin anew as shareholders who were holding out for a recovery finally jump ship.

To bank on pre-earnings jitters, we could buy put options. The Aug $110 puts can be purchased for around $3.80 and offer a lower cost and limited risk way to speculate on additional weakness. 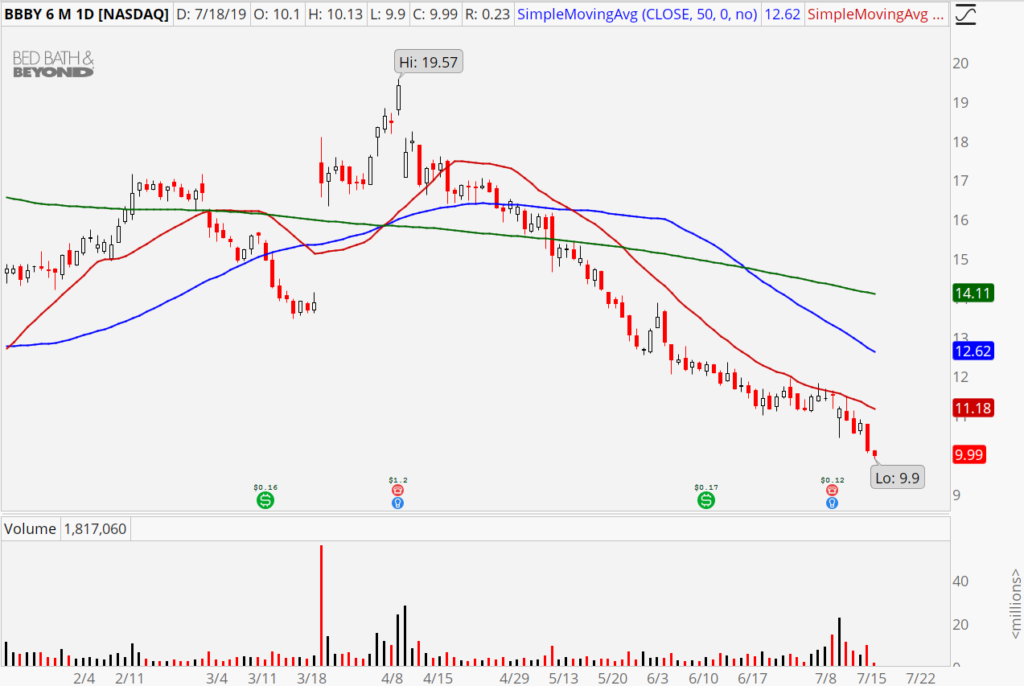 Remember the powerful recovery Bed Bath & Beyond (NASDAQ:BBBY) staged over the first four months of the year? We’re talking about the robust 87% ramp that pulled-in bargain hunters and spectators willing to bet on a turnaround.

And this week, BBBY stock officially broke below the December low that marked the beginning of its once-promising ascent. That means every single person who got suckered into banking on the resurrection is now cursed with a losing position. And they’re all likely sellers at higher prices, which is otherwise known as overhead supply.

Couple the flawed fundamentals with terrible technicals and you have a toxic brew pointing toward lower prices.

Unfortunately, with BBBY already down sharply after last week’s earnings release, it’s tough to recommend new bear trades here. But I would be a seller into any strength. 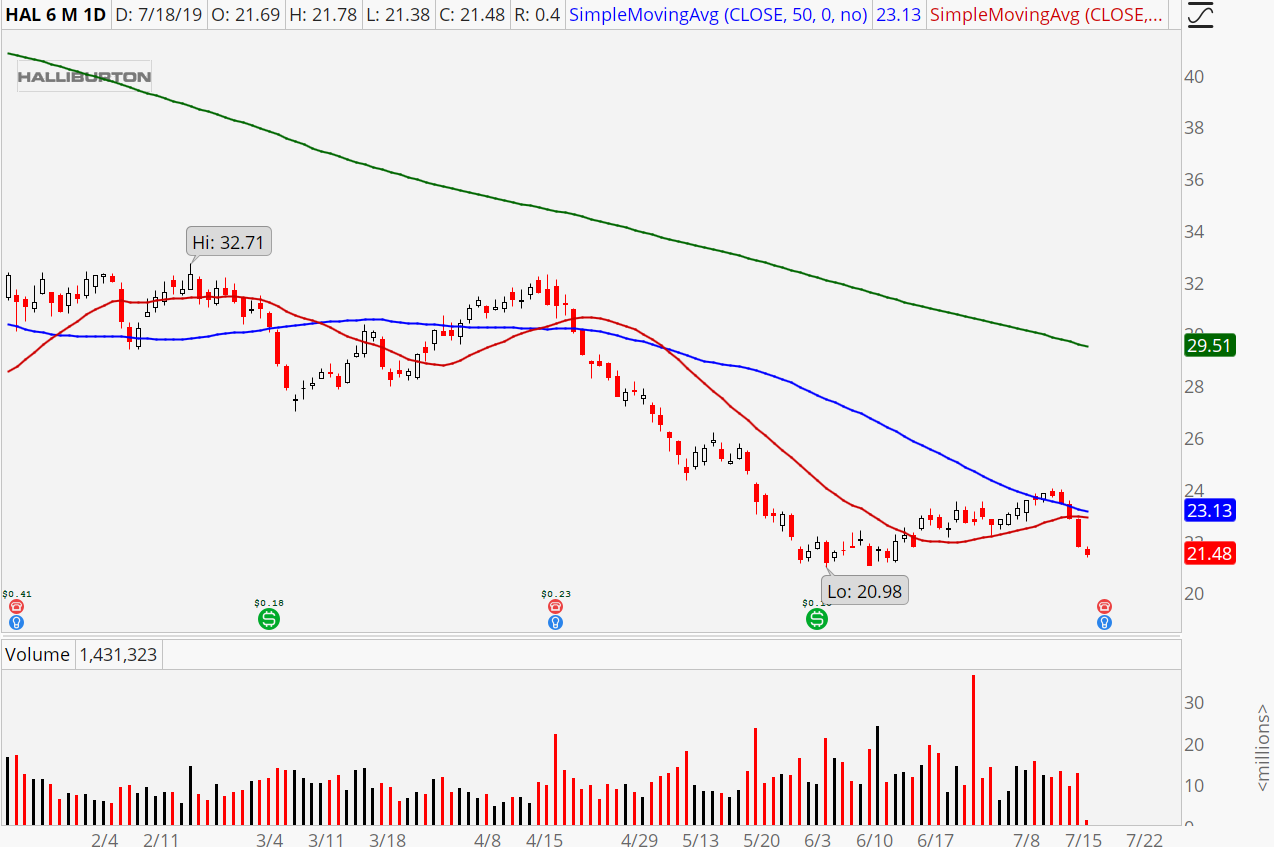 Oil stocks have been poison to portfolios in recent years. And perhaps none best illustrates the damage inflicted than Halliburton (NYSE:HAL). Just last year the oil service titan was flirting with $60. Now it’s threatening to break into the teens.

The downtrend has taken a few pit stops along the way, but overall the descent has been relentless. Its latest two-month pause just gave way to renewed selling, and this morning HAL stock is working on its fifth straight down day. The next earnings report is right around the corner on July 22nd and could provide some relief, but I doubt it.