The S&P 500 gapped up to new all-time highs on Thursday, but quickly found responsive sellers up at that level. That’s not too surprisingly, although it did sap some of wind from the bulls’ sails. The question now is, will longs step up and continue buying or will we top out yet again near current levels? 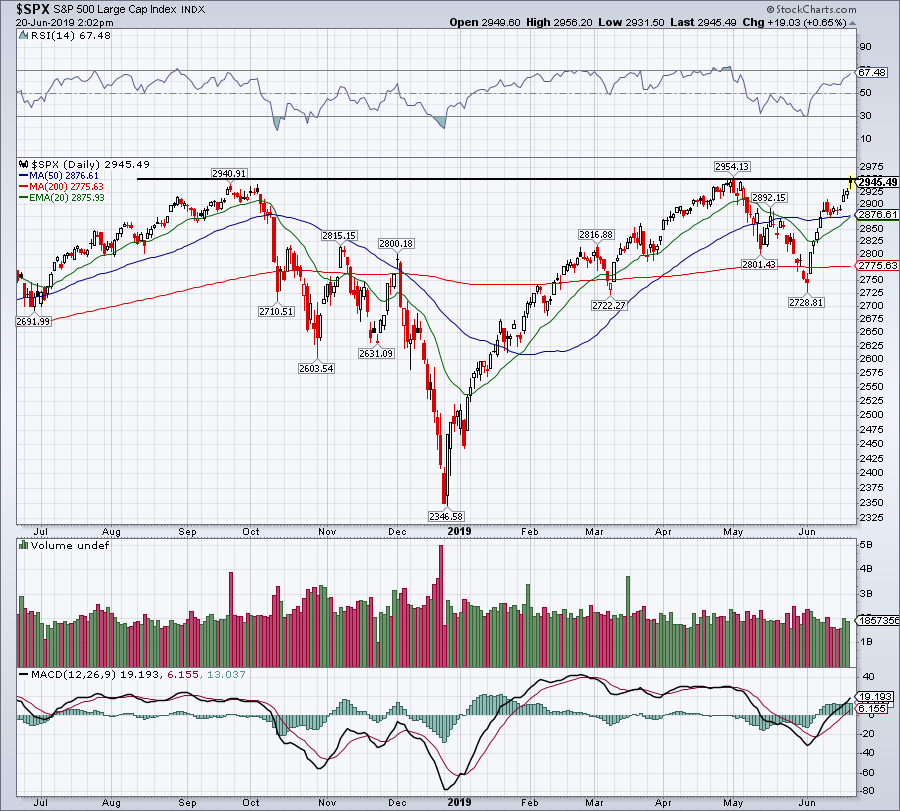 The chart shows the S&P 500 banging its head up against the 2,950 level, while investors can also use the SPDR S&P 500 ETF (NYSEARCA:SPY) to follow the index if they prefer.

It’s crazy to think about the market we’ve had over the past nine or ten months.

And amid all that drama — trade wars, rate hikes, a 20% selloff in Q4 — the SPX is right back to where it was in September.

For me, it’s hard to imagine that we end [Wednesday’s] Fed day stable (and still up big over the past two days), then gap up to new all-time highs today, only to see the whole thing fall apart.

That doesn’t mean we can’t see some selling pressure up here or that a pullback won’t happen.

It’s only to say that the market has had enough time to digest the Fed’s comments to decide whether its good or bad for stocks. So far, they’re voting that it’s good. Let’s see how we end the week and whether a triple top ends the run or if 3,000 on the S&P 500 is possible. 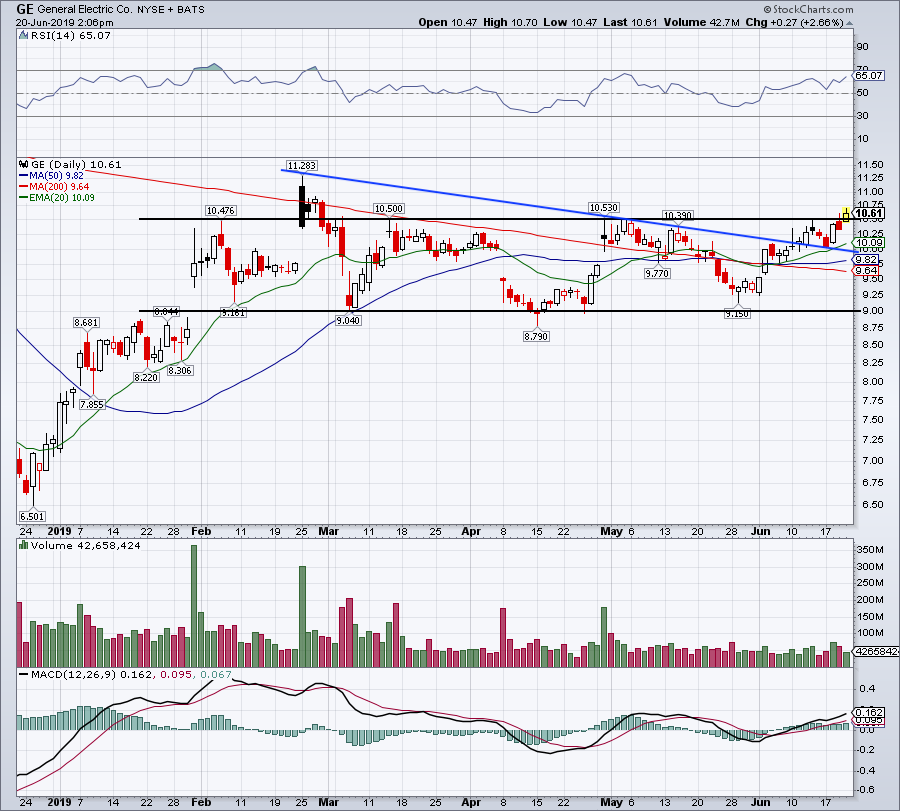 General Electric (NYSE:GE) is breaking out, as the stock continues to push higher and is technically through resistance. It’s now above $10.50, a level we’ve been watching closely in the name. If this level again acts as resistance, see that the stock doesn’t fall below its 200-day moving average. If it holds $10 and its 20-day moving average, all the better.

From here though, let’s see if $10.50 can turn from resistance into support. Staying above this mark could pave the way to $11.25+ now. Especially considering that the stock is not yet overbought. 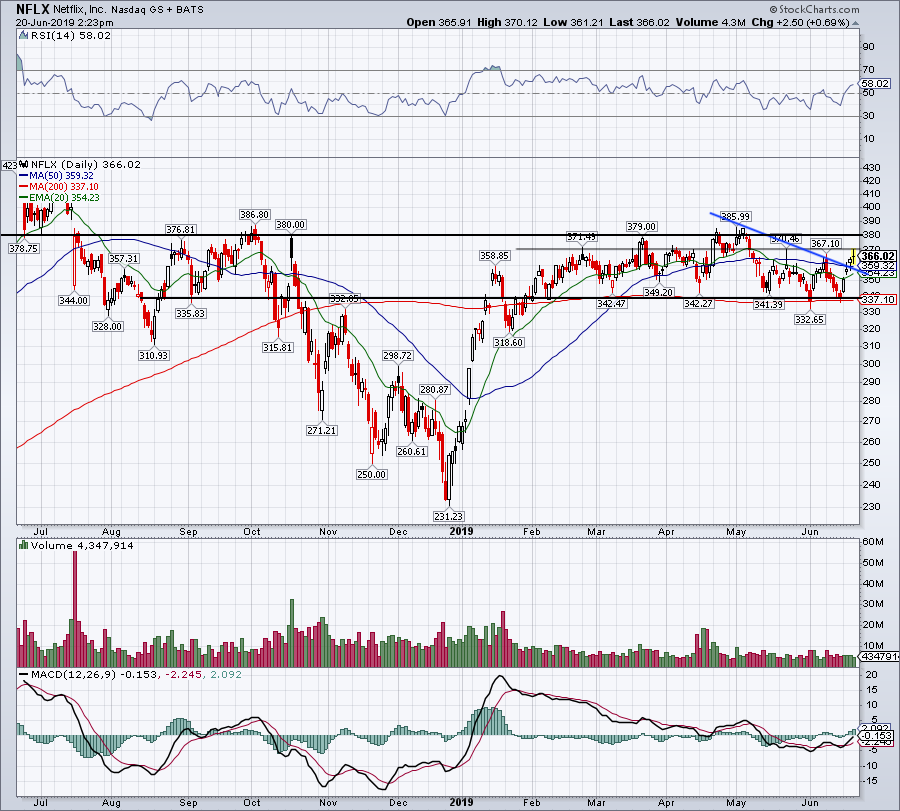 The setup above may look familiar in Netflix (NASDAQ:NFLX). That’s because not all that long ago we called NFLX a buy at $340 range support.

Keep it simple, until NFLX stock makes it harder. 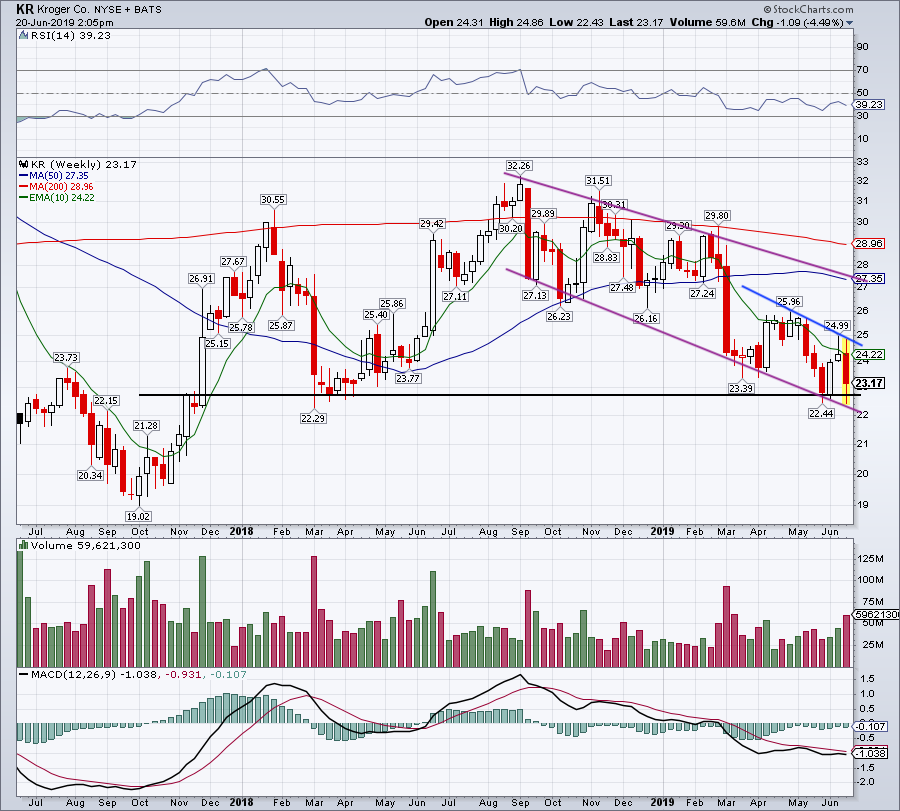 Shares of Kroger (NYSE:KR) are down about 2% after the company reported earnings, as this name continues its unhealthy trend lower.

$23 has proven to be a key level. Below this and channel support just below this week’s lows are on the table. Below that and KR could fall into no man’s land, with multi-year lows lingering between $19 and $20. If it holds, a retest of the 10-week moving average is on the table. Over the 10-week moving average and downtrend resistance, and KR can garner some upside momentum. 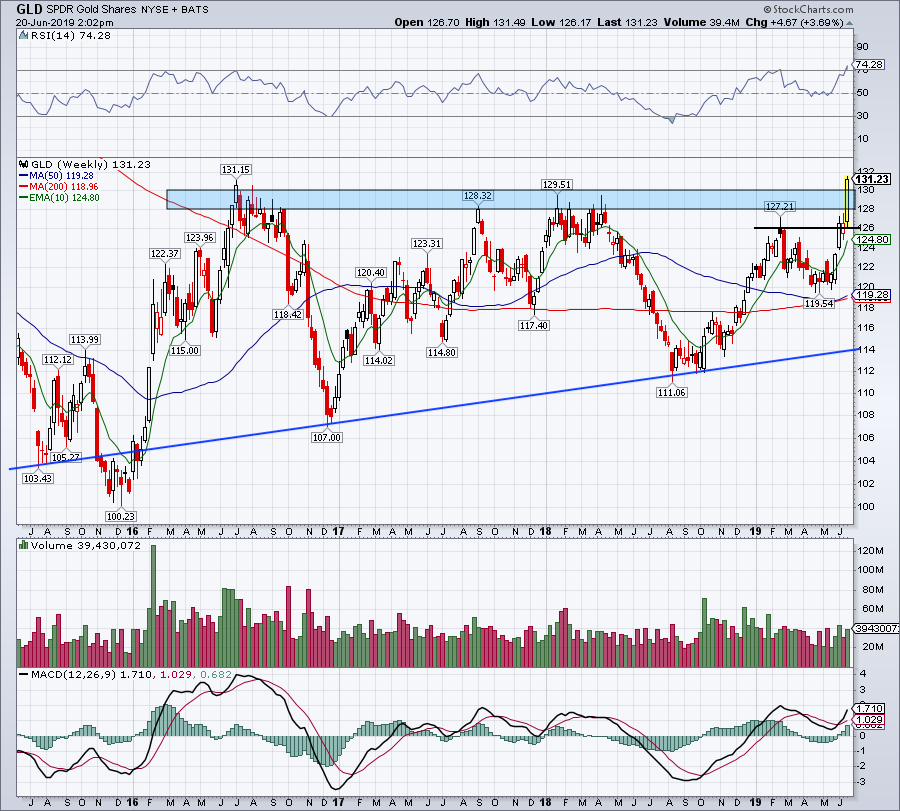 Interestingly, gold is making a powerful move to multi-year highs at the same time the stock market is. That’s as the Fed appears set to cut rates in the not-too-distant future. That devalues the U.S. dollar and typically gives a boost to commodity prices.

That’s why the SPDR Gold Trust ETF (NYSEARCA:GLD) is bursting higher. It’s also why we said Barrick Gold (NYSE:GOLD) could breakout, which is adding to its gains on Thursday.

So now what? I want to see GLD stock hold the $128 to $130 breakout range. For really patient investors, above $126 is still technically okay. Still, I’d rather see it hold a multi-year breakout level rather than just a 2019 breakout level. Over $130 and more gains are possible.