Warren Buffett is considered one of the most successful investors in the world. And really, I don’t blame those who cling to his every last word when it comes to trading advice.

I may not agree with Warren on everything, but it’s easy to see how he reached his status as the third wealthiest man in the world.

When you think about it, it makes sense – fear and greed are the two most dominant emotions that drive the market.

When making money, people are greedy.

When losing money, people are fearful.

It’s natural – but allowing fear and greed to drive trading decisions can be the kiss of death.

There is a way, however, to turn typical fear and greed into huge profits.

And with this strategy, you could become the “next” Warren Buffett…

Use the VIX to Call the Market Just Like Warren Does 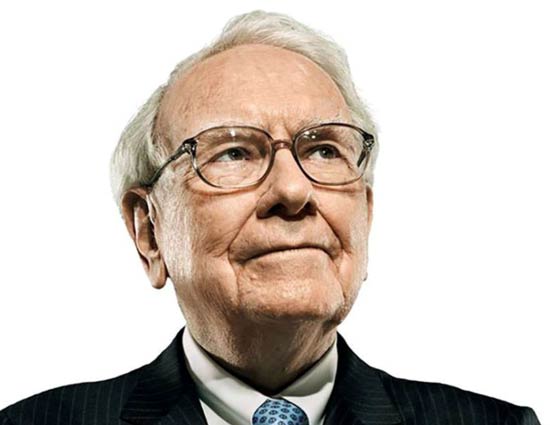 At the end of the day, sentiment is what really drives the markets.

As traders, we’re only human. And humans are emotional beings.

And it’s responsible for the bulk of market movement, as most people allow fear and greed to influence their decision-making. They may stay in trades too long or get out too soon, which can often lead to big losses and lost profits.

This is why we never trade on feelings. Because while others are blinded by emotion, we can use market sentiment to swoop in and snag profits. 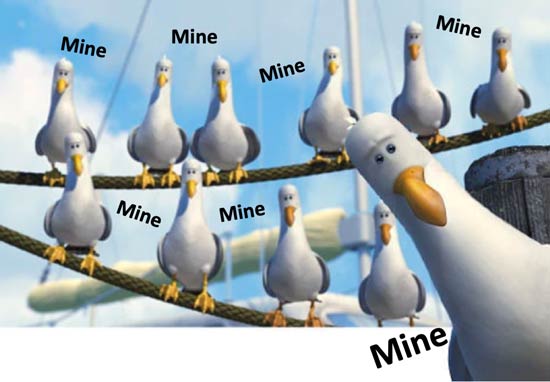 The most popular sentiment indicator is the CBOE Market Volatility Index, or the VIX. Created by the Chicago Board of Options Exchange (CBOE), the VIX is a measure of expected price fluctuations in the S&P 500 options over the next 30 days.

It is calculated by the CBOE in real-time using a complicated “formula to derive expected volatility by averaging the weighted prices of out-of-the-money puts and calls” multiplied by the volatility of the option.

But you can put the complex formula away. Just know that the VIX is a very useful sentiment indicator that can direct us to big profits – when you’re using it the right way.

What can I say? The VIX is misunderstood. Many investors use it to predict the sentiment on individual options. But that will just result in losing money, because the VIX is for the overall market.

It is often referred to as the “fear indicator,” and it’s at its highest when markets bounce after a drop. It does a great job of calling market pivot points, too…

Take a look at the chart below, showing the S&P 500 and the VIX: 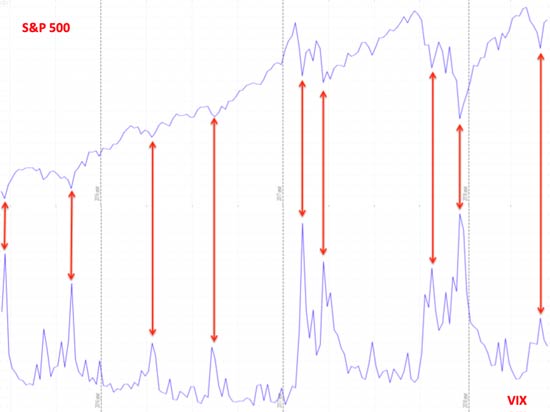 Notice that the VIX (bottom chart) spikes up when the S&P 500 (top chart) spikes down. You can see it at each of the red arrows. This means that the VIX is negatively correlated to the S&P 500. When markets go up, the VIX goes down, and vice versa.
Bearish and correcting markets typically culminate in a capitulation event in which fear is at its highest – and the VIX shows that.

The opposite is also true. The VIX will drop to low levels when the market tops. In other words, fear drops and is replaced by greed.

This relationship is captured in the common trading adage:

In other words, go bullish on the market when the VIX spikes up and bearish when the VIX drops to the low end of its range.

If you’d done that in the chart above, you’d have cleaned up.

The trick is to call the highs and lows in the VIX. Over the past 3 years, the VIX has ranged between 9.14 and 30.11. Now, there are no absolute numbers that define “high” and “low” in the VIX. But after taking that range into consideration, I typically use this reasoning:

Of course, the VIX peaks are only visible in hindsight. So to time your entry points right, you need to apply basic technical analysis – like support, resistance, and volume.
Then, when you play the VIX right, it can drop some major cash into your wallet. I mean, that’s what Warren Buffett does – and his net worth is upwards of $85 billion.

So, who knows? By using the VIX to gauge the overall market’s sentiment, you could become a billionaire in no time.

To your continued success…