We all know how rough the month has been for the market – [last] week alone we [saw] the Dow drop well over 400 points.

And now it looks like we’ve got a new trade war with Mexico to worry about… after President Trump slapped them with a 5% tariff this morning.

Now, while most investors have struggled to keep their portfolios above water – this group of readers has continued to take profits even in the worst volatility.

Here’s how they did it – and how you can too…

The Fastest, Easiest Way to Double Your Money in an Uncertain Market
No matter what you may have been told by the talking heads in the mainstream media, there’s only one true way to get rich in the stock market – and it’s not the ol’ “buy and hold” strategy.

Now don’t get me wrong…

It’s true that you can make some money investing in stocks and mutual funds.

But the most you’re looking at on average (in a good year) is only about a 10% return.

And to maximize your profits, you’ll likely need to hang onto those investments for 10, 15, or even 20 years.

Not with options, though.

When trading options, you don’t have to wait even a week to capture the kind of profits that’d take those buy-and-hold investors decades to make.

But there’s a certain type of options out there, and they deliver profits faster than anything you’ve seen before.

They’re called weekly options (weeklys for short) and they put cash in your pocket in five days or less.

[On Tuesday, May 28 – I sent a recommendation to my subscribers to open a put trade, or what I like to call a “Red Trade,” using the AT&T (T) T June 7, 2019 $32.50 Put options. We are in the midst of a correcting market, and T was hitting the radar hard, posed for some quick downside profits.

Now, at the time, T was trading for $32.33. So imagine trying to get your hands on 100 shares of it. You would’ve needed $3, laying around to dump into T – and would’ve needed to cross your fingers, hoping for the best. 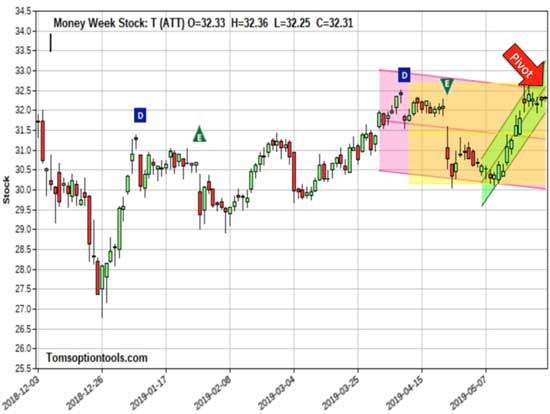 Now, as you can see above, it has bumped up against the $32.5 resistance price point three times over the past six trading days and the channel collision indicator was saying “Three strikes, you’re out!”

And this channel collision was dead on…

Because less than 24 hours later, we pocketed a 104.65% win. But if you did fork out thousands of dollars buying individual shares of the stock, you would’ve actually lost -1.29%.

That’s why it’s almost laughable to see all of the lies and misinformation out there about options. They offer an amazing versatility that you can use in a variety of ways to profit from a rise or fall in the underlying market. And in times of high volatility (like right now), they’re a welcome relief from the uncertainties of traditional investing methods.

But even more specific, when it comes to a fast-moving market like we’re seeing today – you need your trades to move even faster.

And this put trade on T is an example of the power of weeklys.

Now, as you can see, trading weekly options comes with a variety of benefits, from the cheap price tag to the faster profit. But as quickly as you can grab those gains – you can lose cash just as fast – unless you know how to play it just right.

To your continued success…