Selling pressure is starting to grip Wall Street, pushing the indices lower on Wednesday. Will the pressure keep up as we look to June? Let’s look at a few top stock trades on the day. 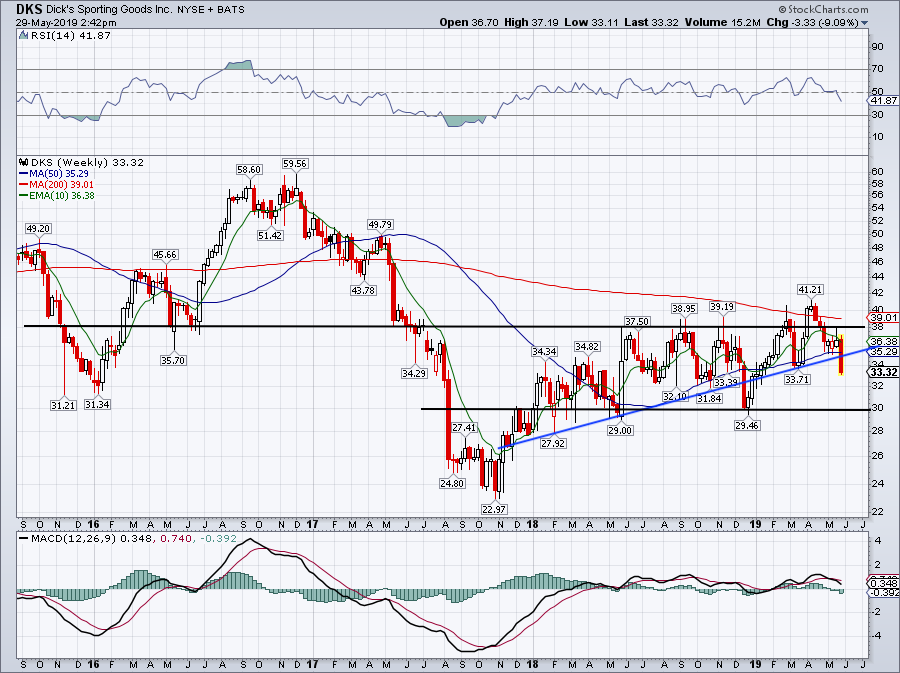 Dick’s Sporting Goods (NYSE:DKS) initially rallied on Wednesday after it reported earnings. However, those gains gave way as the retail sector — weighed down by Abercrombie & Fitch (NYSE:ANF) and Canada Goose (NYSE:GOOS) — came under pressure.

Shares are finding the 10-week moving average as resistance, while cutting right through the 50-week and the 200-day moving average.

If the stock can reverse and reclaim this level, then perhaps it can rally back to its 200-day up near $35.70.

In that scenario, we’d have to see if this level acts as resistance.

If so, the recent lows can in store for another test.

Should shares continue lower, the $29.50 to $30 area could be eventual resting spot. 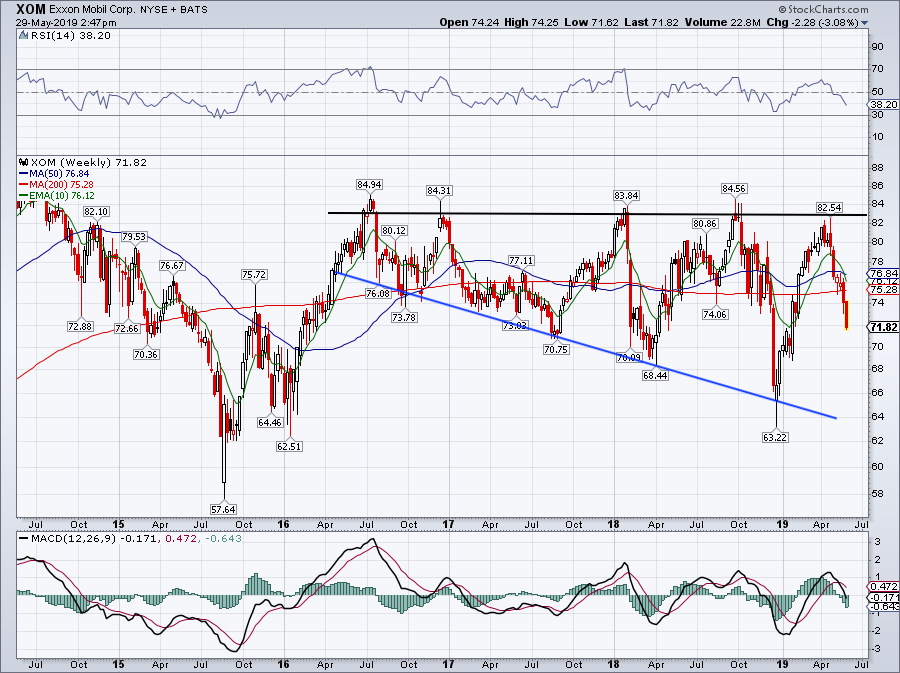 Shares of Exxon Mobil (NYSE:XOM) continue to find resistance in that $83 to $85 range. The question now is, where does support come into play?

Over the last five years, investors have had success buying this stock in the $68 to $71 range. If the bottom of that range fails as support, it’s hard to believe XOM tests downtrend support in the low $60s…but you never know.

On a rebound, see how Exxon handles the $75 to $77 area, where there’s a conflux of moving averages. 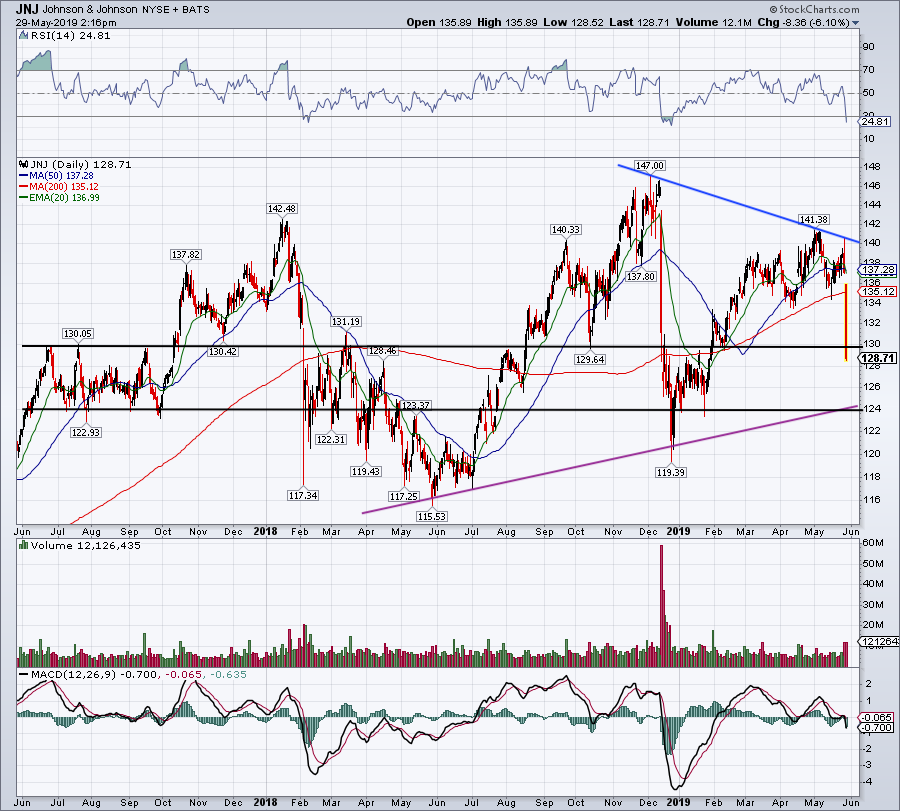 Johnson & Johnson (NYSE:JNJ) is getting slugged on the day, down more than 5%. Shares are below $130, which has me leery moving forward.

Above $130 and a rebound up to $134+ is possible. Should $130 act as resistance though, JNJ may need to test prior support down near $124. This is a high-quality name, so if we see some broad market selling pressure going into June, this one should find its way onto investors’ shopping list. 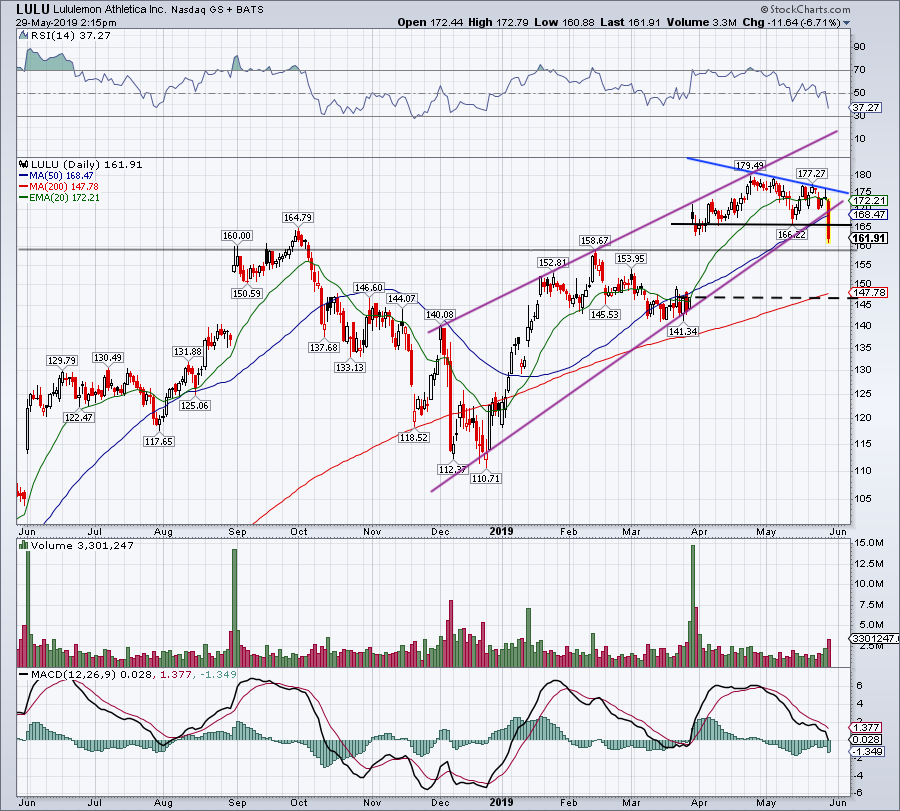 $165 has been post-gap support for Lululemon Athletica (NASDAQ:LULU). That is until Wednesday. Shares broke below this level as well as the 50-day moving average.

It’s very possible that Lululemon remains one of the few retailers that aren’t struggling right now. But with all the negativity in the sector and the big gains in LULU, investors aren’t passing up the chance to book some gains.

On a rebound, see how LULU does with its 20-day and 50-day moving averages.