[Last week was] a rocky week. On Monday we gapped lower on trade concerns, only to see bulls salvage most of the losses on the day. They were then overpowered on Tuesday and Wednesday, and while they lost ground Thursday and for most of the day on Friday, they were able to buoy the market into the green toward the end of the day.

A trade deal squashes the bears and ignites a rally, while an escalation could cause further selling.

Let’s look at a few top stock trades for [this] week.

Early [last] week, there were a few studs that were holding up incredibly well to the selling.

For the most part, that still remains the case. 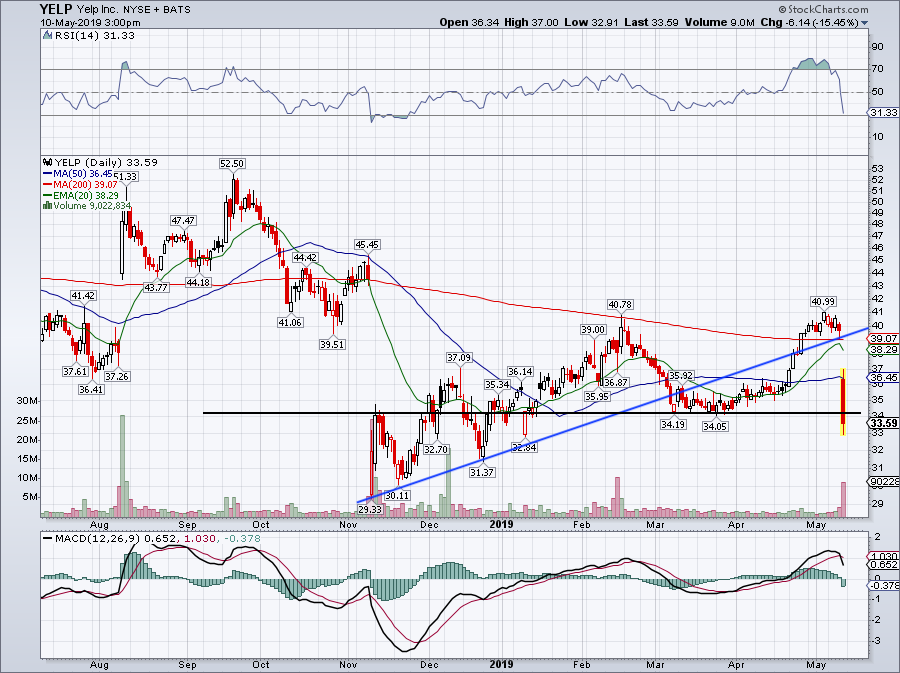 Shares of Yelp (NYSE:YELP) are being destroyed on Friday, falling 13% after the company disappointed with its quarterly earnings results.

The stock is dropping below a key support level and all three of its major moving averages. This is not something that attracts me on the long side. The $33 level is buoying Yelp for now, but under $34 to $34.50 and it’s still a no-touch for me. Below Friday’s lows, and Yelp’s 52-week lows are on the table.

If it can’t get back above prior support, it may set up as a short. Above there and it could get a bounce back to its 50-day. 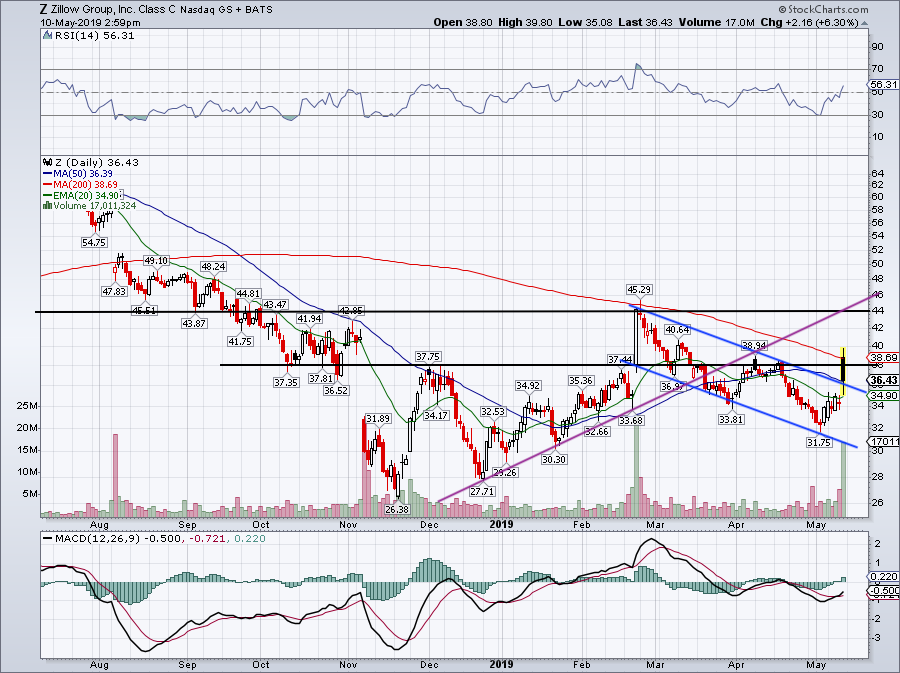 Zillow (NASDAQ:Z) is trading better on the day, up about 6% after it reported earnings. However, shares closed notably below its opening highs.

The action broke Z out of its downtrend channel, but other resistance has stepped up in a big way. $38 cracked initially but held it in check, as did its 200-day moving average. Now Z sits in a vital area. It has to hold the 50-day and backside of prior channel resistance if it wants to go higher.

If it does, a retest of $38 and the 200-day are in the cards. Above that and it can really gain some upside momentum. A break below the 50-day though sends it back to the 20-day moving average and possibly back into its prior channel. 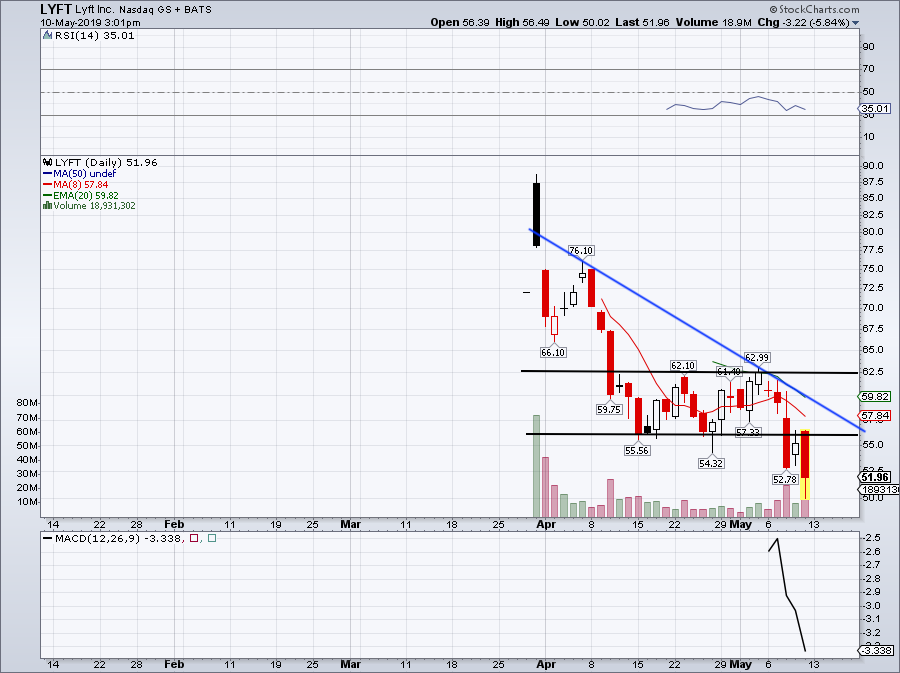 This group is hurting, big time. Lyft is already down more than 40% and hit a low of $50 in the session. Some well-respected traders I follow have considered sticking their toe in the water with Friday’s lows acting as their stop-loss.

That’s a reasonable bet with limited risk. Below short-term range support at $56 and I remain leery of LYFT. For those who play long, look for a rebound to this area, but expect it to act as resistance if it gets there. $56 buoyed Lyft several times in April, but broke earlier this week. Looking at the chart above, you can see that subsequent tests of this area failed.

As for Uber, this article suggests not to trade it on Day One. Given how Lyft has gone, it’s not bad advice. 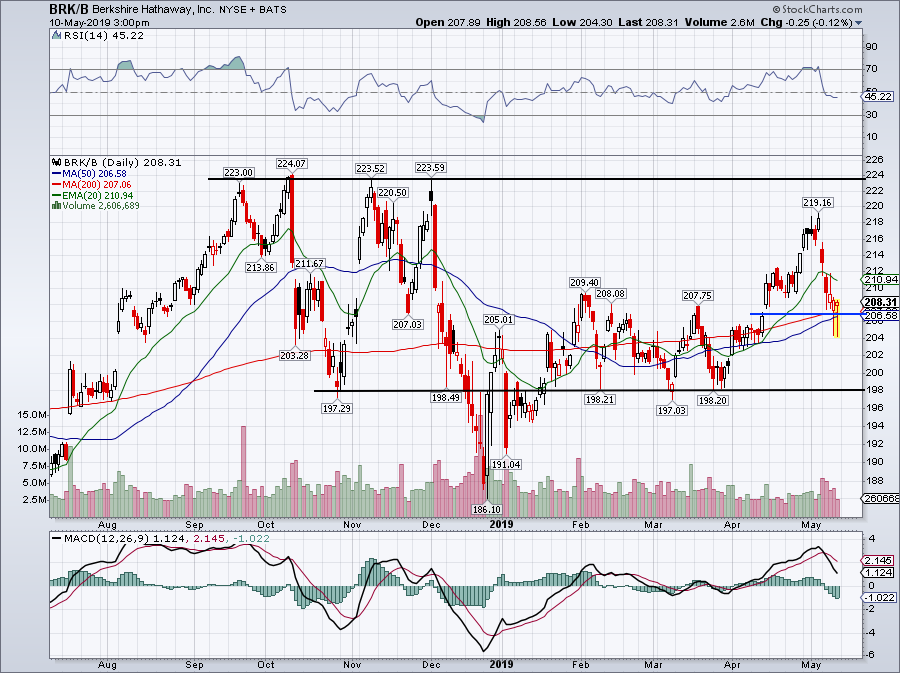 The action in Berkshire Hathaway (NYSE:BRK.B, NYSE:BRK.A) has been interesting. At right is a look at the B shares, where we can see that they have been fighting off a breakdown these last few days.

Both times the stock dropped down to about $204, but recovered to close above the 50-day and 200-day moving averages. This is a great setup, as investors can go long Buffett’s baby with a stop just below the two-day low, or at about $204. 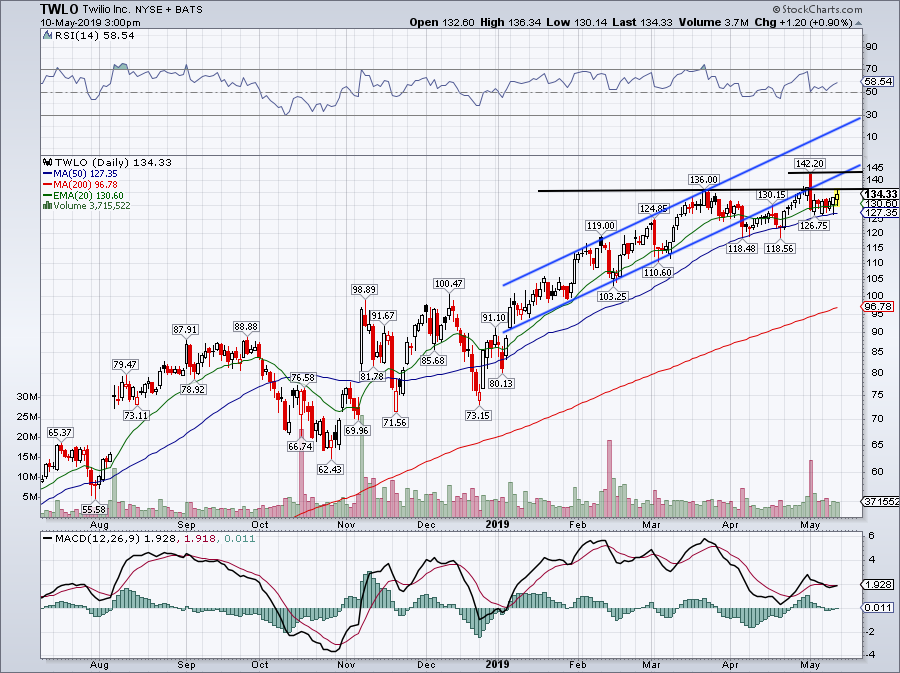 Twilio (NYSE:TWLO) burst higher on earnings and gave up all of its post-earnings gains in a single session last week. It was a sign that the results were good, but not enough to lift a super hot stock even higher.

That’s actually okay action if you’re a long-term investor. However, both long-term and short-term investors have to love the way that TWLO stock has held up this week. It’s hugged that 50-day incredibly well and sets up a great risk/reward.

Below the 50-day and investors can walk. Otherwise, a breakout over $135 is looking more and more likely. My first target would be the earnings-day highs just over $142.