Stocks opened sharply lower for a second straight day on Tuesday, but this time they weren’t able to recover the way they did on Monday. All four of the main indices finished sharply lower, but the Russell suffered the worst loss at 2.02%. The Nasdaq fell 1.96% and that was the second worst decline while the Dow fell 1.79%. The S&P dropped the least, but it still fell 1.65%.

All 10 of the main sectors lost ground on Tuesday with a couple dropping over two percent. The tech sector took the worst hit at 2.15% and the industrial sector fell 2.02% as the second worst performer.

[hana-code-insert name=’adsense-article’ /]The utilities sector only dropped 0.31% and that was the best performance of the bunch on the day.

Those were the only three sectors that didn’t decline at least one percent.

My scans shifted back to a negative tone with all of the selling pressure.

The barometer fell on Tuesday, but it remained in positive territory. The final reading came in at 9.2 after a reading of 13.8 on Monday.

Even though the lists were skewed to the bearish side, the trade idea for today came from the bullish list. Devon Energy (NYSE: DVN) caught my eye more for its chart than its fundamentals. The company scores a 75 on the EPS rating and that’s pretty good, but the SMR rating is only a C and that is average.

Part of the reason for choosing Devon was due to a bullish signal from Tickeron’s AI Prediction tool on Monday. The signal showed a confidence level of 90% and it calls for a gain of at least 4% over the next month. Previous predictions on the stock have been successful 76% of the time. 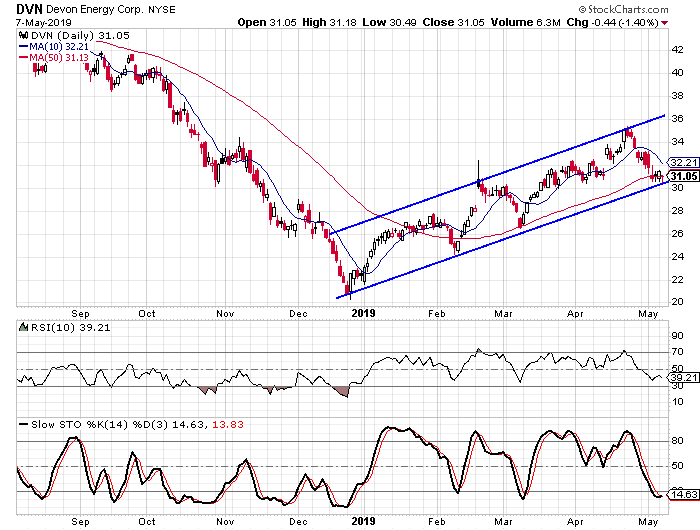 Devon has been moving higher within a trend channel over the last four and a half months. The stock is currently hovering just above the lower rail and the daily stochastic readings are in oversold territory. The indicators made a bullish crossover yesterday. The last time the scenario was like this, with the stock at the lower rail and the stochastics making a bullish crossover was on March 8. The stock rallied over 22% in the three weeks that followed that setup.