After President Trump tweeted on Sunday the he intended to implement new tariffs on Chinese goods, stocks got off to a really bad start on Monday. At the open, all four of the main indices were down over 1.5%. But after many members of the administration tried to spin the tweets as a negotiating tactic, investors calmed down and the indices rallied back.

The Russell rallied all the way back to close with a gain of 0.02%. The Nasdaq fell 0.5% and that was the worst loss of the four. The S&P dropped 0.45% as the second worst performer and the Dow lost 0.25% for the smallest loss of the main three.

[hana-code-insert name=’adsense-article’ /]Nine of the 10 main sectors fell on Monday.

The healthcare sector gained 0.61% as the only one of the bunch to move higher.

The energy sector was the second best performer, but it still lost 0.05%.

The materials sector was the worst performer of the bunch with a loss of 1.46% and it was the only one that finished with a loss greater than one percent.

The industrial sector fell 0.94% as the second worst performing sector.

My scans moved further in to positive territory on Monday with 48 names on the bullish list and only three on the bearish list.

The barometer jumped in to positive territory once these results were added to the equation and the final reading was 13.8, up from -9.5.

The trade idea for today comes from the bullish list and it is on Lowe’s Companies (NYSE: LOW). The company scores an 81 on the EPS rating scale and a B on the SMR rating system. The company is scheduled to report earnings on May 22, so you will want to be aware of that date. 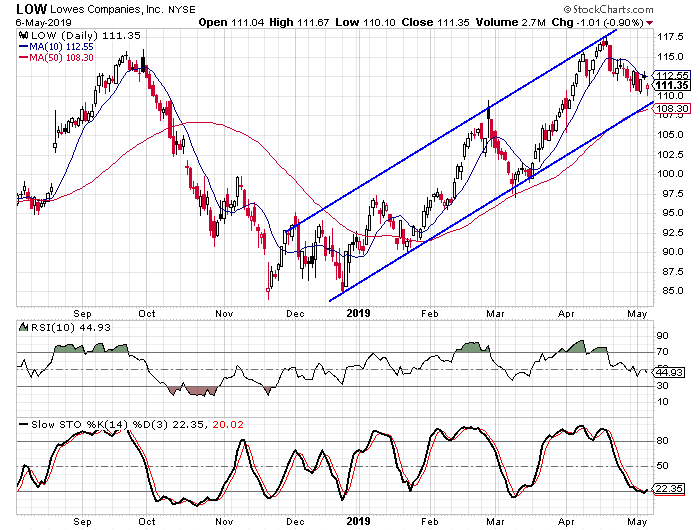 The stock has formed a trend channel over the last six months and the stock is close to the lower rail at this time. The 50-day moving average is also in close proximity to the lower rail. The stochastic readings reached oversold territory and made a bullish crossover yesterday. The last three times the indicators have done this same thing, the stock has moved sharply higher over the following month.