Stocks soared on Friday as the April employment report came in with more job growth than expected. All four indices moved sharply higher as a result, but the Russell topped them all with a gain of 1.98%. The Nasdaq also had an impressive gain at 1.58%. The S&P (0.96%) and the Dow (0.75%) had smaller gains, but they were still pretty impressive.

All 10 sectors moved higher on the day and the industrial sector jumped by 1.21% to lead the way. The consumer discretionary sector had the second best performance with a gain of 1.18%. As impressive as the gains were for the indices, these two sectors were the only ones to finish with gains over one percent.

[hana-code-insert name=’adsense-article’ /]The utilities sector experienced the smallest gain at 0.55%.

My scans stopped their streak of negative readings at two with a positive result on Friday.

The barometer rose from -23.8 to -9.5 once these results were added in to the equation.

The trade idea for today came from the bullish list and it is on the SPDR S&P Biotech ETF (NYSE: XBI). After the dip in mid-April, the fund appears to have found its footing. The Tickeron AI Trend Prediction tool I use from time to time generated a bullish signal on the XBI on Friday and it shows a confidence level of 88%. Previous predictions on the XBI have been accurate 88% of the time. 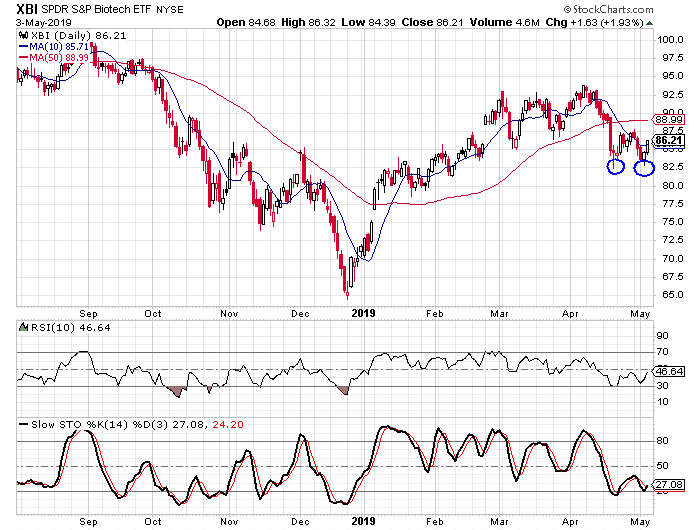 We see the sharp decline from April 5 through April 18. That pullback that hit the biotech and pharma industry stocks seems to have been unwarranted. The XBI bounced a little after the initial pullback and then dipped again. This looks like a double bottom pattern to me and I expect the fund to rally sharply in the coming weeks.