Thursday brought more selling to the majority of stocks and the indices ended up with split performances. The Russell logged a gain of 0.33%, but it was the only index of the main four that moved higher. The Dow dropped 0.46% and that was the worst performance of the four. The S&P fell 0.21% and the Nasdaq lost 0.16%.

Seven of the 10 of the main sectors fell on Thursday with three moving higher. The energy sector got hit hard again and lost 1.74% on the day. That was the only sector that lost more than one percent. The tech sector suffered the second worst loss at 0.52%.

[hana-code-insert name=’adsense-article’ /]The healthcare sector led the way again, only this time it was a gain rather than the smallest loss like it was on Wednesday.

The financial sector tacked on 0.14% and that was good enough for the second best performance.

The consumer discretionary sector (+0.08%) was the third one to gain ground.

The barometer moved down a little once the results were added to the equation, falling from -20.7 to -23.8.

Even though there were more names on the bearish list than the bullish list, the stock that got my attention the most was on the bullish list.  Medical Properties Trust (NYSE: MPW) is a REIT that invests in medical properties and the company has some solid fundamental ratings, earning a 94 on the EPS rating and an A on the SMR rating. 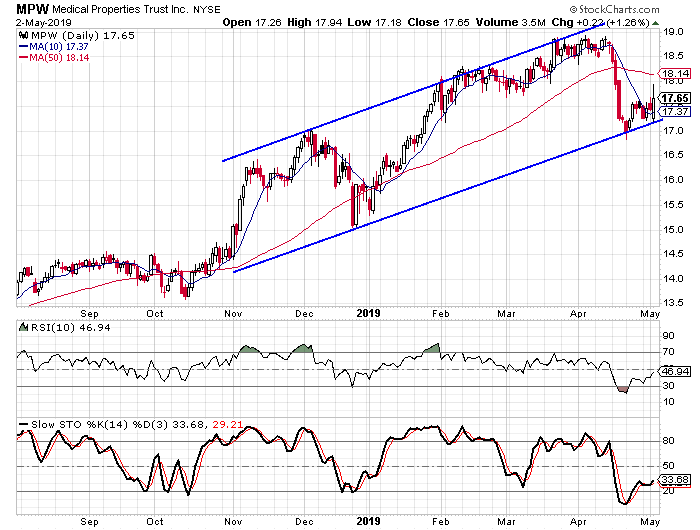 The stock has formed a trend channel over the last six months and the stock his hovering just above the lower rail currently. The daily stochastic readings have performed two bullish crossovers in the last few weeks and the indicators did the same thing back in late December and early January.

Buy to open the June $17-strike calls on MPW at $1.05 or better. These options expire on June 21. In order for these options to double the stock will need to move up to $19.10. That is slightly above the highs in March and April, but below the upper rail of the channel. I suggest a target gain of 100% with a stop at $17.15.