Wednesday was a bit of an odd day for the market. The Fed announced that it was leaving the Fed Funds rate where it is and that it will be patient in determining its next move. That is what most people expected. The Fed did make an adjustment to excess reserves held by the Fed, lowering it from 2.4% to 2.35%. It was a minor adjustment, but noticeable that it was to the downside.

The Nasdaq was helped by Apple, but still lost 0.57% on the day.

These three indices didn’t move in to negative territory until after the Fed announcement.

All 10 of the main sectors finished in negative territory with differing levels of losses.

The energy sector suffered the worst loss at 2.0%.

The materials sector dropped 1.81% and that was the second worst loss.

In all, five sectors dropped over one percent.

With the selling, my scans turned negative last night with 66 names on the bearish list and eight on the bullish list.

With the decidedly bearish skew from the scans, the barometer turned negative with a reading of -20.7. That negative reading ended a stretch of six straight positive readings.

After a number of bullish trade ideas, I finally have a bearish trade idea for you today.  Teva Pharmaceutical Industries (NYSE: TEVA) appeared on the bearish list and its fundamental ratings aren’t that great. The company scores a 21 on the EPS rating system and a C on the SMR rating scale. The company has seen its earnings decline by an average of 17% per year for the last three years. 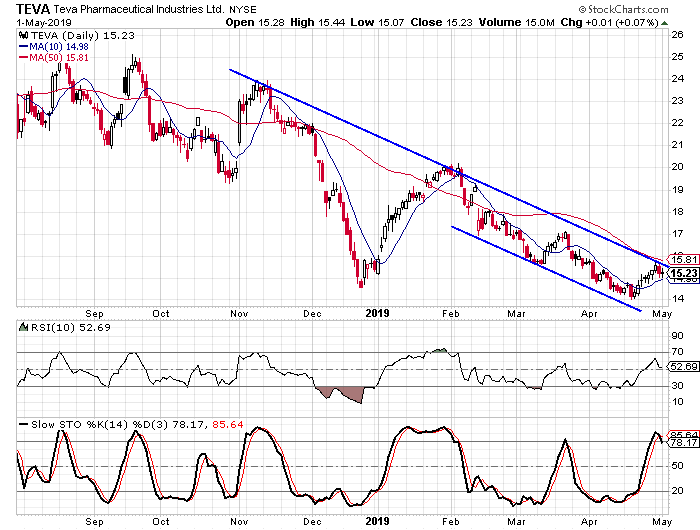 The chart has been trending lower for quite a while now. The highs from the last six months connect to form a downward sloped trend line and over the last three months the lows seem to be forming a lower rail. The daily stochastic readings were in overbought territory and made a bearish crossover yesterday.