Stocks were mixed on Tuesday after a couple of big earnings reports on Monday evening and Tuesday morning. Google’s results helped drag the tech sector down, thus hurting the Nasdaq while positive surprises from Pfizer and Merck boosted the Dow. The final results showed the Dow up 0.15% and the S&P gained 0.10%. The Nasdaq fell 0.81% and the Russell lost 0.45%.

The sectors were also mixed, but there was definitely a positive skew to the results. There were seven that moved higher while three moved lower and the earnings definitely played a role in the results.

[hana-code-insert name=’adsense-article’ /]The communication services sector (Google) fell 2.25% on the day and that was by far the worst performance.

The consumer discretionary sector dropped 0.15% and the energy sector fell 0.08% as the other two sectors in negative territory.

As for the winning sectors, the utilities sector led the way with a gain of 1.64% and the consumer staples sector was up 1.16% as the only other sector to gain more than one percent.

My scans produced a positive result on Tuesday, but by a rather small margin.

The barometer inched up slightly, moving from a reading of 0.8 to 3.4 once these results were added to the equation.

The scans were a little odd last night as there seemed to be more good fundamental scores on the bearish list than there were on the bullish list. Regardless, today’s trade idea came from the bullish list. The subject is the Deutsche X-Trackers Harvest CSI 300 China A-shares ETF (Amex: ASHR). Being a fund it doesn’t have fundamental ratings, but it does score an 84 on the relative strength rating. 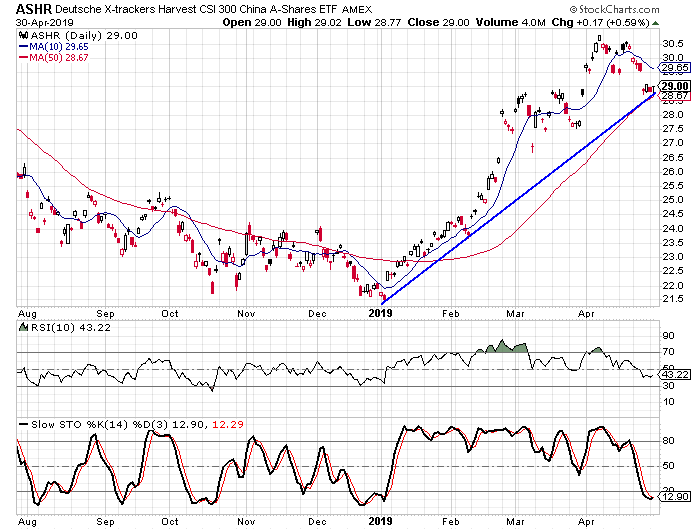 The daily chart shows a steep ascent for ASHR as it has moved from the $22 area to a high of $30.79 in early April. That is a gain of over 40% for an ETF that represents an overall market—China. The recent pullback brought the fund down to the trend line that connects the lows from January and February. It also brought the stochastics down to oversold territory for the first time since January.

Buy to open the June $28-strike calls on ASHR at $2.00 or better. These options expire on June 21. In order for these options to double the fund will need to move up to $32.00. The trajectory of the rally and the trend line make me believe that target shouldn’t be a problem. I suggest a target gain of 100% with a stop at $28.50.