Monday saw modest gains for most stocks and that led to all four indices moving up slightly. The Russell led the way with a gain of 0.41%. The Nasdaq moved up 0.19% as the second best performing sector and it was followed by the S&P with a gain of 0.11%. The Dow lagged the other three but still posted a gain of 0.04%.

The sectors were evenly split on Monday with five moving higher and five moving lower. Financials led the way with a gain of 1.03% and it was followed by the communication services sector which moved up 0.95%.

[hana-code-insert name=’adsense-article’ /]Of the sectors that moved lower, the utilities sector took the worst hit at 0.60%.

The consumer discretionary sector was down 0.35% and that was the second worst performance.

Like the sectors my scans were split down the middle last night.

The positive reading runs the streak to five straight days above zero and that is the longest streak since December.

With the lists equally represented, I went through each chart looking for patterns I liked. I also ran a number of the stocks through the Tickeron Trend Prediction tool. The best combination of probabilities and the chart that I saw was on the Materials Select Sector SPDR (NYSE: XLB). The signal was generated on Friday and it calls for a gain of at least 4% over the next month. The signal showed a confidence level of 87% and 85% of previous predictions on the ETF have been successful. 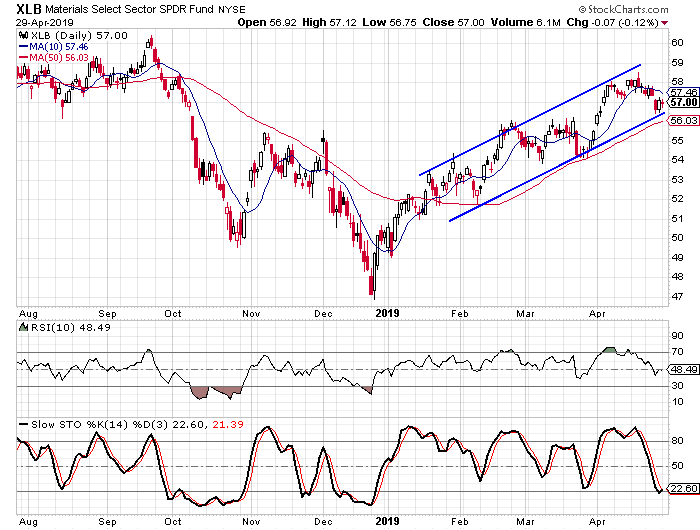 The chart itself shows an upwardly sloped trend channel with the stock hitting the lower rail in the last few days. The 50-day is just below the lower rail as a secondary layer of support. The daily stochastic readings came close to oversold territory, but they made a bullish crossover yesterday and look to be turning higher.

Buy to open the June $56-strike calls on XLB at $2.05 or better. These options expire on June 21. In order for these options to double the fund will need to reach $60.10. That price level is above the recent high, but not as a high as the price reached last September. I suggest a target gain of 100% with a stop at $56.30.