Stocks rallied on Friday and all four indices gained ground. The Russell led the way with a gain of 1.03%. The S&P turned in the second best performance with a gain of 0.47%. The Nasdaq added 0.34% and the Dow lagged but still tacked on 0.31%. The gains helped the Nasdaq, Russell, and S&P finish with gains on the week while the Dow experienced a small loss on the week.

Eight of the 10 main sectors moved higher on Friday with the healthcare sector leading the way with a gain of 1.03%. The financial sector tacked on 0.91% as the second best performer and the consumer staples sector moved up 0.90% to finish third.

The tech sector was the other sector that lost ground, losing 0.38%.

The sector was heavily affected by Intel’s earnings report and the semiconductor falling.

My scans flipped to a positive skew after a few nights of negative readings.

Despite the positive scans, the barometer fell slightly due to small difference between the two lists and the two negative readings on the previous nights.

The final reading on Friday was 4.5.

After four straight bullish trade ideas, I looked especially hard at the bearish list but didn’t find any trade setups I liked. Instead I have a bullish trade idea on Cabot Oil &Gas (NYSE: COG). The company does well in the fundamental indicators with a 77 on the EPS rating and an A on the SMR rating scale. 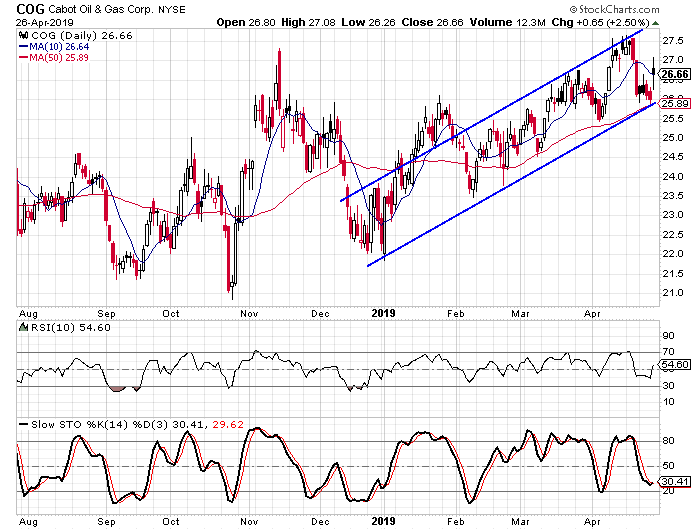 The daily chart shows how the stock has been moving higher for the last four months within the constraints of a trend channel. The stock just hit the lower rail of the channel last week and looks poised to move higher in the weeks ahead. The stochastic readings weren’t in oversold territory, but they were below average and made a bullish crossover on Friday.

Buy to open the June $25-strike calls on COG at $2.35 or better. These options expire on June 21. In order for these options to double the stock will need to get to $29.70. The upper rail of the channel should be close to that level by the time these options expire. I suggest a target gain of 100% with a stop at $25.75.