Thursday saw the bulk of stocks move lower with three of the four main indices moving lower. The Nasdaq managed a gain of 0.21% on the back of strong gains from the likes of Microsoft and Facebook. The Russell took the biggest hit with a drop of 0.79%. The Dow fell 0.51% and that was greatly due to 3M falling almost 13%. The S&P only lost 0.04%.

Six of the 10 main sectors fell on the day with the industrial sector suffering the worst loss at 2.01%. The materials sector fell 1.27% and those were the only two sectors to lost more than one percent.

[hana-code-insert name=’adsense-article’ /]The top performing sector on Thursday was the communication services sector with a gain of 1.12%.

The healthcare sector tacked on 1.03% and it was the only other one to move up more than one percent.

My scans produced a small negative skew yesterday with 16 names on the bearish list and 12 on the bullish list.

The barometer fell a little, but managed to remain in positive territory after another small negative differential.

The final reading for Thursday was 5.5.

With a limited number of stocks to work with on each side, it made it pretty easy to choose the subject of today’s trade idea.

The iShares MSCI Hong Kong ETF (NYSE: EWH) appeared on the bullish list and there was a pattern in the chart I caught that I liked. It also helped that I got confirmation from the Tickeron AI Trend Prediction tool. The tool generated a bullish signal on April 24 with a confidence level of 86% and 76% of past predictions have been accurate. The signal calls for a gain of at least 4% within the next month. 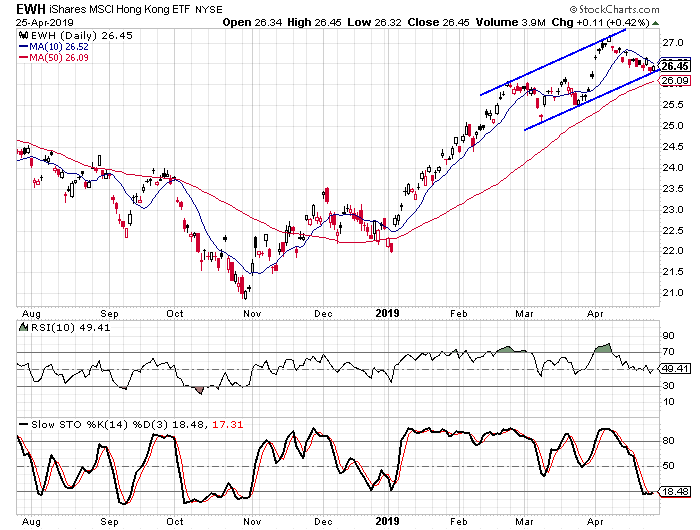 The chart shows a short term trend channel that has formed over the last few months and the stock just hit the lower rail of that channel. In addition, the stochastic readings hit oversold territory for the first time since October and they made a bullish crossover last night.

Buy to open the June $25-strike calls on EWH at $8.50 or better. These options expire on June 21. In order for these options to double the fund will need to reach $28.40. Based on the chart and where the upper rail should be in a few weeks, I think that target is reachable. I suggest a target gain of 100% with a stop at $26.10.