Stocks followed Tuesday’s gains with some mixed activity on Wednesday, but the skew was toward the downside. The Russell moved higher by 0.19% and it was the only one in positive territory. The other three indices were grouped tightly in their performances. The Nasdaq lost 0.23% and the Dow and S&P both lost 0.22%. All four indices limped in to the close.

The sectors were mixed with six moving lower and four moving higher. The energy sector was the worst performer of the bunch with a loss of 1.75%. The materials sector fell 0.62% as the second worst performer and the communication services sector dropped 0.46% as the third worst.

This reflects the risk off tone the market had on the day.

My scans produced negative results on Wednesday with 23 names on the bearish list and 18 on the bullish list.

Even though the daily results flipped to a negative reading, the barometer managed to remain in positive territory with a reading of 9.8.

The stock that stood out the most to me last night was Atlassian (Nasdaq: TEAM) and it was on the bullish list.

The numbers from IBD are really good for the company with an EPS rating of 99 and an SMR rating of an A. The stock also gets a composite rating of 99 which is the highest possible score. 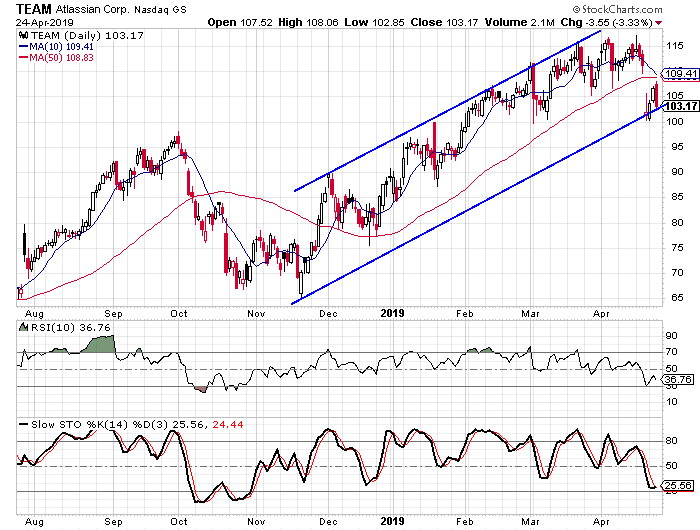 The chart shows how the stock has been trending higher since November and moved below its 50-day moving average after earnings last week. The company beat on its EPS estimate, but the projections were disappointing. This could be presenting a buying opportunity as the stock dropped to the lower rail of a possible trend channel. The highs connect nicely, but the lower rail is simply connecting the low from November with this week’s low.