After a split performance on Monday, stocks left little doubt where the momentum was on Tuesday and that momentum was to the upside. All four indices moved higher with the Russell leading the way—moving up 1.63%. The Nasdaq also turned in an impressive performance with a gain of 1.32%. The S&P and Dow finished with more modest gains of 0.88% and 0.55%, respectively.

The sectors turned a more bullish performance on Tuesday as well with eight moving higher and only two moving lower. The healthcare sector bounced back after last week’s selling and it led the way with a gain of 1.58%.

[hana-code-insert name=’adsense-article’ /]The communication services sector had the second best performance by adding 1.38%.

The consumer staples sector dropped 0.23% as the worst performing sector while the energy sector fell by 0.10% as the only other sector in the red.

My scans produced positive results for a second straight night with 54 names on the bullish list and 15 on the bearish side.

The positive skew from last night’s results was enough to lift the barometer in to positive territory with a reading of 6.9. That is the first positive reading from the barometer since April 1. 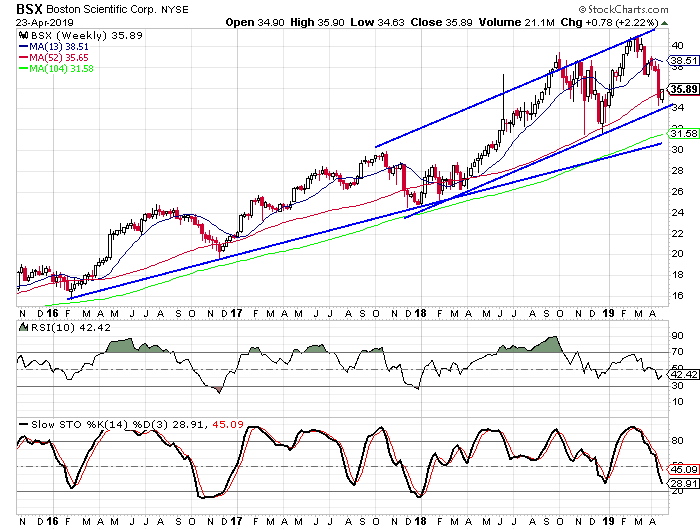 The weekly chart for Boston Scientific tells the story of the long-term trend better than the daily chart. As you can see the stock has been trending higher for several years and the trajectory of the trend changed toward the beginning of 2018. A trend channel formed last year that has defined the cycles within the long-term trend and the stock came close to the lower rail this week. It has since turned higher and the daily stochastic readings made a bullish cross out of oversold territory.

Buy to open the June $35-strike calls on BSX at $2.50 or better. These options expire on June 21. In order for these options to double the stock will need to reach $40.00, at least on an intrinsic basis. That is shy of the recent high, so the stock shouldn’t hit technical resistance. I suggest a target gain of 100% with a stop at $34.50.