Monday saw a mixed day for stocks with two indices moving up and two moving down. The Nasdaq was the top performer with a gain of 0.22% and the S&P finished higher by 0.10%. The Dow lost 0.18% and the Russell was the worst performer with a drop of 0.36%.

Like the indices, the sectors were split right down the middle with five moving higher and five moving lower. The energy sector was the hands-down winner on the day with a gain of 2.11%.

[hana-code-insert name=’adsense-article’ /]Oil shot up after President Trump announced his intentions to halt the waivers on Iranian oil sanctions.

The communication services sector was the second best performing sector with a gain of 0.45%.

The materials sector was the biggest laggard on Monday with a drop of 0.67%.

The consumer discretionary sector fell 0.38% as the second worst performer while industrials lost 0.31%.

My scans produced a positive result for the first time in 13 tries on Monday.

There were 42 names on the bullish list and 34 on the bearish side.

The barometer did move up thanks to positive daily reading, but it remained in negative territory with a reading of -20.

After getting the first positive result from the scans in 13 days, I almost felt obligated to make a bullish selection for today’s trade idea. It did make it easier when I found Momo Inc. (Nasdaq: MOMO) on the bullish list with its EPS rating of 83 and SMR rating of an A. 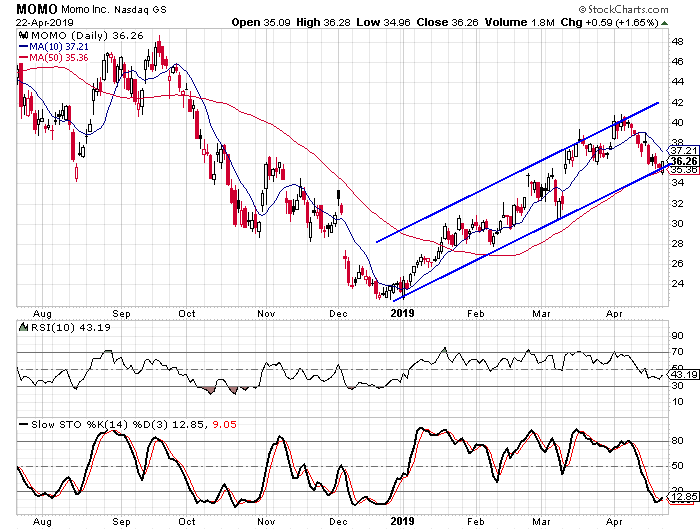 The chart shows how Momo has been moving sharply higher since the end of December and how a trend channel has formed. The lows from December and March connect nicely to form the lower rail and the stock just hit on Thursday. The daily stochastic readings were in oversold territory for the first time since December and they made a bullish crossover on Monday.