The results for the indices were mixed again on Thursday with three finishing higher and one finishing lower, but once again the discrepancy in the returns was pretty wide. The Dow led the way with a gain of 0.42% and it was followed by the S&P which was up 0.16%. The Nasdaq notched a small gain of 0.02% while the Russell fell 0.12%.

[hana-code-insert name=’adsense-article’ /]The energy sector was the worst performer with a loss of 0.47% and it was followed by the financial sector which declined by 0.29%.

The consumer discretionary sector was the third one in the red and it was only down 0.03%.

My scans were less negative on Thursday than they had been in the three previous sessions.

The barometer moved up a little once these results were added in to the equation, rising from -45.1 to -37.9.

The barometer has been in negative territory for 13 straight days now.

Today’s trade idea came from the bearish list and it is on Keycorp (NYSE: KEY). The company’s aren’t bad with an EPS rating of 73 and an SMR rating of a B, but the chart was more compelling to me. Plus the company reported earnings on Thursday and they came up short on both the EPS estimate and the revenue estimate. 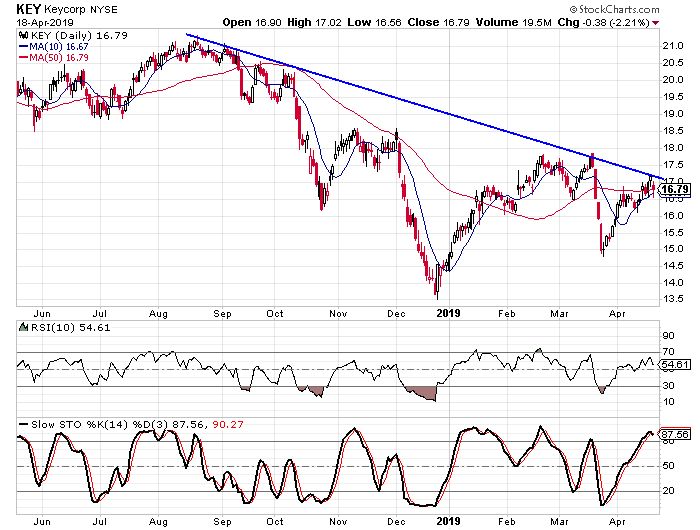 KEY has been trending lower since the fall and there is a trend line connecting the highs. The stock hit this trend line on Wednesday and then fell on Thursday after the earnings miss. Personally I think there is more downside than just the one day of selling.