Stocks were mixed on Wednesday with the indices and sectors split on their performances. The four main indices were down on the day, but the losses varied greatly. The Russell was the worst performer with a drop of 0.96%. The S&P dropped 0.23% for the second worst performance while the Nasdaq (-0.05%) and Dow (-0.01%) suffered much smaller losses.

Six of the 10 main sectors moved higher on Wednesday which runs counter to all four indices falling. The tech sector had the best performance with a gain of 0.56% and it was followed by the consumer staples sector with a gain of 0.5%.

[hana-code-insert name=’adsense-article’ /]The healthcare sector got crushed yesterday and dropped 2.88%.

That was far and away the worst performance among the sectors.

The second worst performance came from the materials sector which declined 0.62%.

My scans turned more negative last night with 87 names on bearish list and six on the bullish list.

Today’s trade idea is a bullish one, but it isn’t on a stock or a stock ETF.

It is on the iShares 20+ Year Treasury Bond ETF (Nasdaq: TLT). The ETF has slipped in recent weeks after jumping in March when the Fed became more dovish in its monetary policy. When rates go down, bonds go up in price and vice versa. The Fed doesn’t control the bond market directly, but influences it with open market activity. Part of the more dovish stance is limiting or slowing down its own buying of bonds. This leaves the movements to the actions of traders and investors. 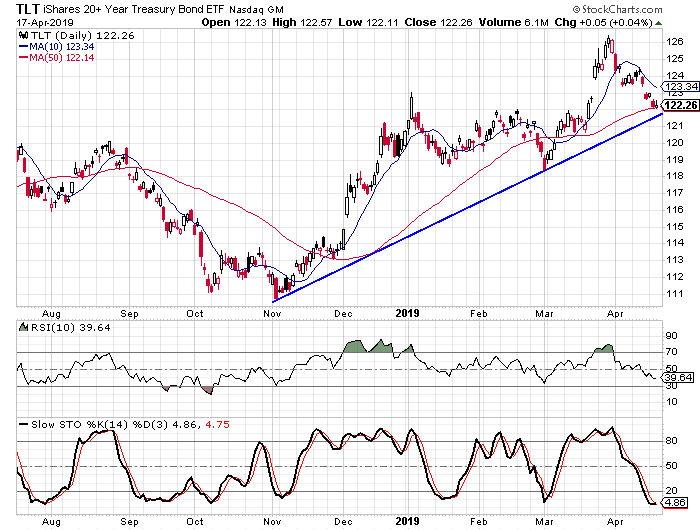