For the most part stocks moved higher on Tuesday, but the gains got cut throughout the day. In fact, the S&P dipped in to negative territory in the final hour.

All four of the main indices did manage to close in positive territory and the Nasdaq led the way with a gain of 0.30%. The Dow gained 0.26% and that was good for second while the Russell moved up by 0.23%. The S&P logged the smallest gain at 0.05%.

[hana-code-insert name=’adsense-article’ /]The sectors were all over the place and at the end of the day there were seven that moved higher while three moved lower.

The financial sector led the way with a gain of 1.41% and it was the only one to gain over one percent.

The energy sector garnered the second best gain at 0.64%.

The healthcare sector was the worst performer with a loss of 2.05% and the utilities sector got hit pretty hard as well and fell 1.34%.

The scans remained bearishly skewed on Tuesday with 32 names on the bearish list and seven on the bullish list.

Staying with the pattern that started five days ago—a bearish trade idea followed by a bullish one, I have a bullish idea for you today. Stoneco LTD. (Nasdaq: STNE) appeared on the bullish list last night and the companies fundamental ratings are pretty solid. The EPS rating is an 84 and the SMR rating is a B. 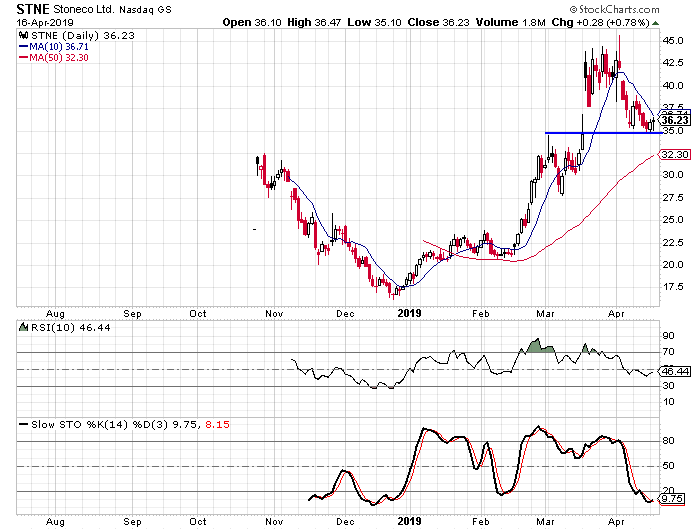 There isn’t as much technical data on Stoneco as what we usually see because the stock just debuted back in October. Even with the limited data, there were a few things that stood out to me. First, the daily stochastic readings are in oversold territory and just made a bullish crossover. When they did that in February, the stock jumped sharply over the next month and a half.

The second thing that caught my eye was how the stock gapped higher in March and then consolidated. The stock has pulled back in the last few weeks and that pullback has filled the gap from March. Many times a stock has trouble after a gap higher until it pulls back and fills the gap.

Buy to open the July $35-strike calls on STNE at $5.80 or better. These options expire on July 19. In order for these options to double the stock will need to reach $46.60. That is slightly above the high from early April, but I think it can break through there. I suggest a target gain of 100% with a stop at $34.50.