Monday saw some selling reenter the market and all four indices moved lower on the day. The Russell was the worst performer with a drop of 0.36%. The Dow and Nasdaq both saw losses of 0.1% and the S&P notched the smallest loss at 0.06%.

Seven of the 10 main sectors moved lower on the day. The financial sector suffered the worst loss at 0.63% after Goldman Sachs and Citigroup reported earnings. The second worst loss came from the energy sector at 0.59%. The industrial sector was close behind with a decline of 0.56%.

[hana-code-insert name=’adsense-article’ /]The consumer staples sector was the top performer with a gain of 0.59%.

The healthcare sector bounced back from a loss on Friday with a gain of 0.4%.

The consumer discretionary sector joined those two in positive territory with a gain of 0.2%.

The scans produced another negative result last night with 33 names on the bearish list and only seven on the bullish list.

The barometer moved up despite the negative results on Monday.

The company that is the subject of today’s trade idea has already been mentioned and it is a bearish play. Goldman Sachs (NYSE: GS) disappointed on its earnings report and the fundamentals were only average and slightly average to begin with. The EPS rating is a 58 and the SMR rating is a B. 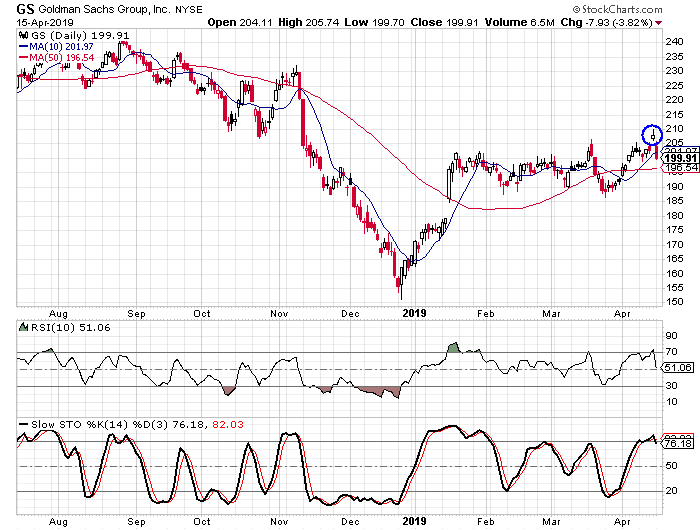 The pattern the stock created with its gap lower yesterday is called an abandon-baby top. The pattern occurs when it gaps higher one day and then gaps lower the next. The body of the candlestick from Friday doesn’t touch any part of the candle from Thursday or Monday. The pattern is a bearish indicator and I look for the stock to continue you lower in the coming weeks.