[hana-code-insert name=’adsense-article’ /]The sectors were split on the day with a slight skew to the bullish side.

There were seven that finished higher and three finished lower.

The industrial sector led the way with a gain of 0.87% and it was followed by the financial sector which tacked on 0.57%.

The tech sector had the second biggest decline at 0.14% and the materials sector (-0.07%) was the third one to fall on the day.

My scans continue to produce bearishly skewed results and Thursday made it eight straight days with a negative skew. At the end of the day, there were 48 names on the bearish list and eight on the bullish list.

The barometer continues to hover just below the -50 level with last night’s reading coming in at -50.1.

The bullish list was rather paltry in terms of stocks with good fundamentals, so today’s trade idea is a bearish one on Arcelor Mittal (NYSE: MT). The stock appeared on the bearish list and the company scores an 11 on the EPS rating and a C on the SMR rating. 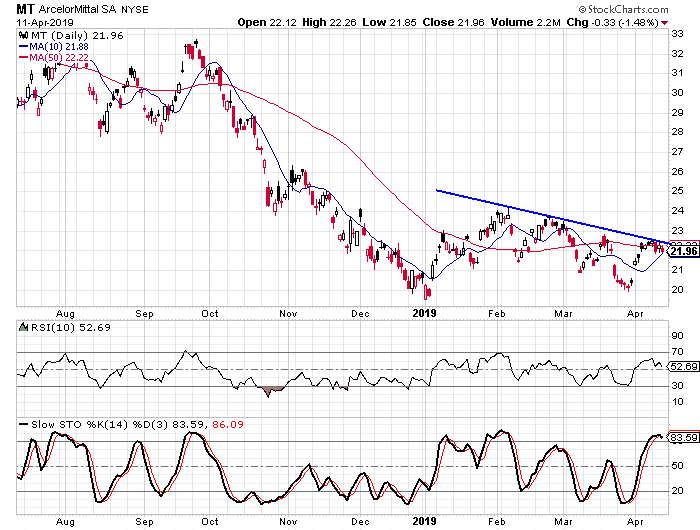 The daily chart shows the stock trending lower for quite some time now, but what really caught my eye was the trend line connecting the highs for 2019. The high from early February connects with the high from late February and the stock has been hugging that trend line in the last few days. We also see that the daily stochastic readings were in overbought territory and just made a bearish crossover.