The winning streak for the S&P came to a halt on Tuesday as selling pressure hit all four of the indices. The Russell suffered the worst loss at 1.20% and it was followed by the Dow which fell 0.72%. The S&P dropped 0.61% and the Nasdaq had the smallest loss at 0.56%.

Eight of the 10 main sectors lost ground on Tuesday and the industrial sector suffered the worst loss at 1.37%. The energy sector fell 1.22% and it was the only other sector to lose more than one percent.

[hana-code-insert name=’adsense-article’ /]The utilities sector led the way with a gain of 0.26% and it was joined in positive territory by the communication services sector which logged a gain of 0.25%.

The -104 differential is the worst reading since February 21.

The barometer dropped to -54.2 from -22.7 after these results were added in to the equation.

For today’s trade idea, I am kind of doubling down on the airlines moving lower.

United Continental Holdings (Nasdaq: UAL) appeared on the bearish list, but its fundamental ratings are pretty good. The company gets a 92 on the EPS rating and a B on the SMR rating. 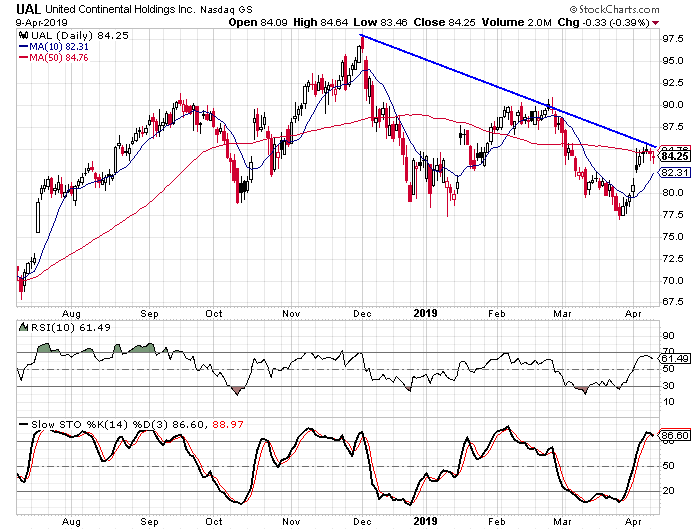 The chart shows a downward sloped trend line connecting the highs from December and February. The stock just hit the trend line last week. The stock is overbought based on the daily stochastic readings and the indicators just made a bearish crossover.

I have mentioned the Tickeron Artificial Intelligence Prediction tool a few times recently. The tool generated a bearish signal for United on Monday and it showed a confidence level of 67%. Previous predictions on United have been accurate 69% of the time.