Stocks opened lower Monday and all four indices were down at the open. However, the Nasdaq and S&P rallied back to close in positive territory while the Dow and Russell both rallied, but didn’t quite make it to positive territory.

[hana-code-insert name=’adsense-article’ /]Six of the 10 main sectors moved higher on Monday and they were led by the energy sector which gained 0.44%.

The tech sector and the consumer staples sector tied for the second best performance with both logging a gain of 0.40%.

The utilities sector was the worst performer on the day, falling 0.72%.

The industrial sector dropped 0.43% and that was the second worst performance.

My scans produced a bearishly skewed result for a fifth straight night on Monday with 26 names on the bearish list and 13 on the bullish side.

The barometer inched up a little from -28.5 to -22.7. The barometer has moved up over the last two days as the difference between the lists has been less negatively skewed.

Today’s trade idea comes from the bearish list and the company is American Airlines Group (Nasdaq: AAL). I suggested puts on American back on February 8 and that trade idea generated a 100% gain. American’s fundamentals ratings are mixed with an EPS rating of 36 and an SMR rating of a B. 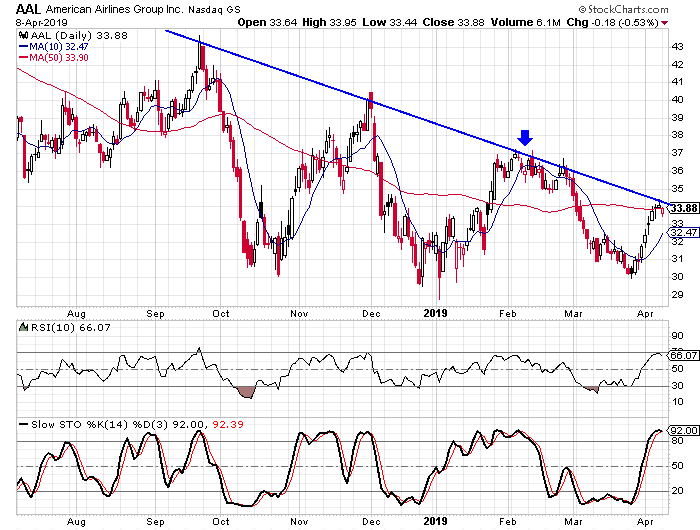 As you can see on the chart, I am using the same trend line that was used to generate the bearish trade idea back in February. The stock dropped like we wanted it to and now it has bounced back up to the trend line. The stock hit overbought status last week and the stochastic readings made a bearish crossover yesterday.

Buy to open the June $35-strike puts on AAL at $2.75 or better. These options expire on June 21. In order for these options to double, the stock would need to drop down to $29.70. The stock does seem to have some support in the $30 area, so I would suggest setting a target to close the position if the stock hits $30. Based on the intrinsic value, that should give investors a gain of 82%. I would also recommend a stop at $34.50.