Friday saw stocks move higher once again. At this point the S&P 500 has moved higher for seven straight sessions. The Russell led the way on Friday with a gain of 0.96%. The Nasdaq was up 0.59% while the S&P tacked on 0.46%. The Dow lagged the other three, but still gained 0.15%.

Nine of the 10 main sectors moved higher on Friday. The only sector that didn’t advance was the materials sector which lost 0.03%.

[hana-code-insert name=’adsense-article’ /]The energy sector led the way with a gain of 1.76%.

The utilities sector moved up 0.94% as the second best performer and the healthcare sector gained 0.69% as the third best.

My scans produced a fourth straight negative result as more and more stocks have become overbought.

There were 40 names on the bearish list Friday night and 23 on the bullish side.

Despite the bearish tone to the scans and the barometer, the stock that stood out the most to me was on the bullish list. Cabot Oil & Gas (NYSE: COG) appeared on the bullish list and the company has good fundamental readings. The stock gets a 76 on the EPS rating and it scores an A on the SMR rating. 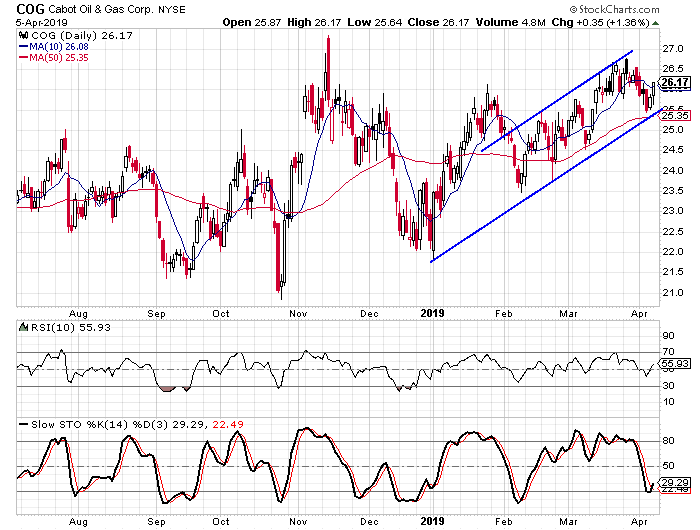 The daily chart shows how a trend line formed connecting the low from January and the low in February. This trend line turned in to the lower rail of a channel when the highs from February and March connected with a parallel line. The stock came close to the lower rail last week and that rail is in close proximity to the 50-day moving average.