The sectors were mixed with a skew toward the bullish side. There were seven that moved higher while three moved lower.

[hana-code-insert name=’adsense-article’ /]The materials sector led the way with a gain of 1.03% and it was followed by the energy sector which added 0.82%.

The tech sector was the worst performer with a loss of 0.40% and it was followed by the utilities sector which dropped 0.38%.

The healthcare sector was the other one in negative territory with a decline of 0.21%.

My scans continued to move farther in to the negative side on Thursday when there were 61 names on the bearish side and only eight on the bullish side.

The barometer fell from -11.8 to -30.2 once these results were added in to the equation.

Given the number of bearish signals you would be right to assume the trade idea for today is a bearish one. Goodyear Tire & Rubber (NYSE: GT) appeared on the bearish list last night and the company’s fundamentals aren’t very good. It scores a 29 on the EPS rating system and a D on the SMR rating. 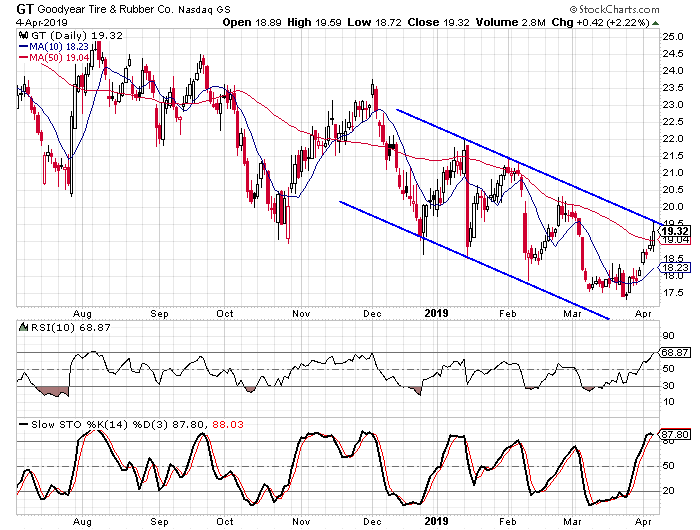 The daily chart shows how the stock has been trending lower over the last nine months, but in reality it has been trending lower since January ’18. The trend channel that has formed over the last few months is more interesting to me at this time. The stock hit the upper rail of the channel and it is overbought. I look for it to make its next move lower in the coming weeks.