Wednesday saw another round of buying for stocks and all four of the main indices moved higher as a result. The Nasdaq led the way with a gain of 0.60% and the Russell added 0.49% for the second best performance. The S&P gained 0.21%, but that was well off of its highs of the day. The Dow finished up 0.15% and it was the only one of the indices that dipped in to negative territory at any point during the day.

Even though the indices were all up on the day, the sectors were split right down the middle with five moving higher and five moving lower. The materials sector led the way with a gain of 1.31% while the tech sector moved up 0.81% as the second best performer.

Oil inventories showed a big jump in the weekly inventory report and that sent oil down.

Consumer staples fell 0.49% and that was good enough for the second worst performance.

My scans produced negative results for a second straight night with 29 names on the bearish list and 11 on the bullish list.

The barometer dipped a little further in to negative territory with a reading of -11.8, down from -2.8 on Tuesday.

Even though there were more bearish signals to choose from last night, the trade idea for today is a bullish one. The VanEck Vectors Junior Gold Miners ETF (NYSE: GDXJ) was on the bullish list last night and the chart shows a trend channel has formed in the last six months and the fund just hit the lower rail. 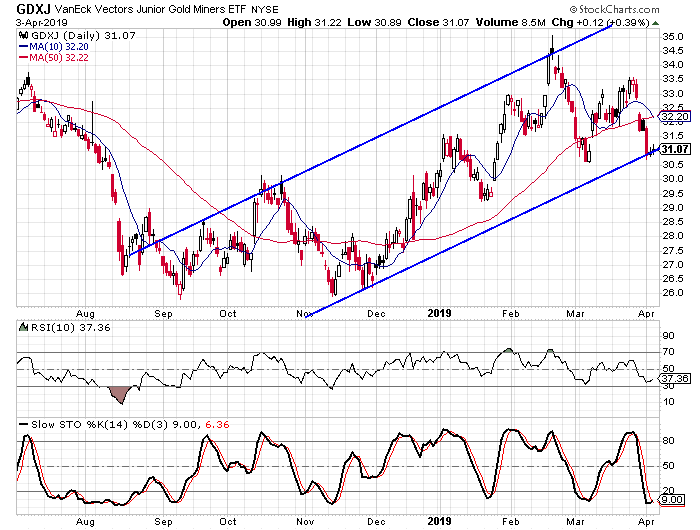 The stochastic readings just made a bullish crossover while they are in oversold territory like we saw in early March and mid-January. Yesterday I mentioned the artificial intelligence tool from Tickeron that I use. That same tool that predicted a downward move for SM Energy made a bullish prediction for the GDXJ on Monday. The signal on the GDXJ showed a confidence level of 77% and 88% of previous predictions on the fund have been accurate.