Tuesday was a mixed day for stocks with two of the four indices moving lower and two moving higher. It was also mixed in how they moved throughout the day. The Nasdaq was in positive territory for most of the day and finished with the best gain at 0.25%.

[hana-code-insert name=’adsense-article’ /]The sectors were split with a slight bearish skew to them.

Six moved lower and four moved higher on the day.

The consumer staples sector was the worst performer with a loss of 0.82% and it was followed by the energy sector which was down 0.69%.

The string of positive readings from my scans came to a close last night as there were 36 names on the bearish list and 14 names on the bullish side.

The barometer moved in to negative territory ever so slightly with a reading of -2.8.

After three straight bullish trade ideas, I have a bearish one for you today. SM Energy (NYSE: SM) appeared on the bearish scan and the company’s fundamentals aren’t all that great. It scores a 15 on EPS rating and a C on the SMR rating. 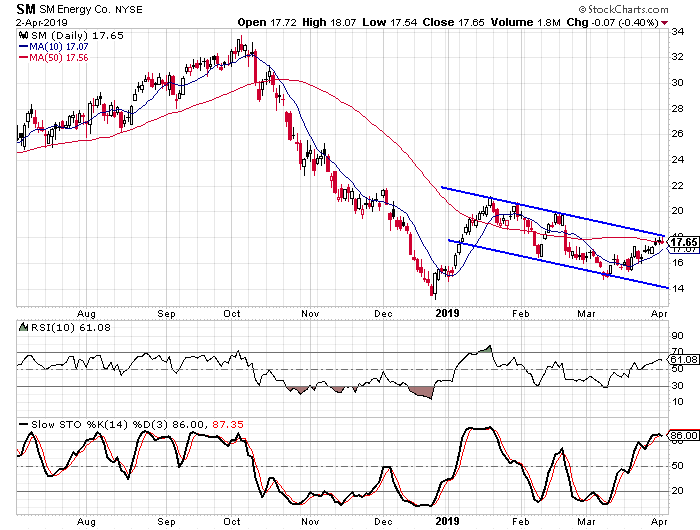 We see on the chart that the stock has been trending lower within the confines of a downward sloped trend channel over the past few months and the stock just hit the upper rail of the channel. The stock is overbought based on the daily stochastic readings and the 50-day moving average is in the vicinity of the upper rail.

There is another factor on this trade as well. I use an artificial intelligence tool from Tickeron.com from time to time and their prediction tool generated a bearish signal on Monday as well. The prediction had a confidence level of 63% and past predictions from the tool on SM have been accurate 80% of the time.

Buy to open the May $20-strike puts on SM at $2.90 or better. These options expire on May 17. The options will double if the stock drops to $14.20. The lower rail is down around $14 currently and it is moving lower, so the stock will have to get close to that lower rail for these options to double. I suggest a target gain of 100% with a stop at $18.20.