Stocks moved higher on Monday as positive manufacturing news out of China set the tone for the day. The domestic retail sales numbers were disappointing and so were the manufacturing reports out of Europe, but investors seemed to shrug those off. At the end of the day, all four of the main U.S. indices finished higher.

[hana-code-insert name=’adsense-article’ /]Eight of the 10 main sectors moved higher as it was a risk on kind of day.

The two sectors that lost ground were the defensive sectors—utilities lost 0.67% and consumer staples lost 0.29%.

The financial sector led the way with a gain of 2.41% and the industrial sector joined it as the only other sector to gain over two percent—industrials gained 2.07% on the day.

My scans produced their sixth straight positively skewed results last night with 24 names on the bullish list and 16 names on the bearish list.

Even though the results were positively skewed, the barometer dropped from 18.1 to 12.9 because of the small difference between the two lists.

For the second straight day I have a bullish trade idea on a semiconductor stock. Today’s idea is on Texas Instruments (Nasdaq: TXN) and the company shows strong fundamentals with a 91 EPS rating and an A on the SMR rating. The company is scheduled to report earnings on April 22 so you will want to keep an eye on that. 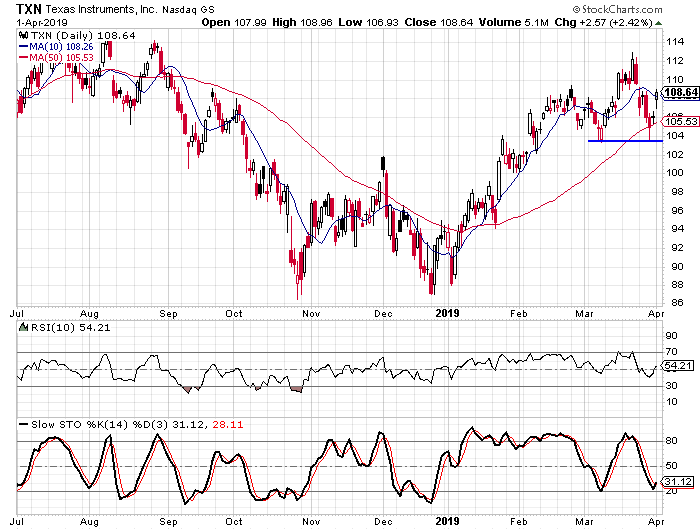 Texas Instruments dropped to a low of $103.63 last Thursday and that is close to the low back on March 8. This looks like a double-bottom formation and now the stock looks poised to move above the high between the two lows and that would confirm the pattern. I also like the fact that the stock closed right on its 50-day moving average on Thursday.