Friday brought the first quarter to a close and it ended one of the best first quarters in the last 20 years. It also brought gains for the indices across the board. The Dow led the way with a gain of 0.82% and it was followed closely by the Nasdaq which tacked on 0.78%. The S&P notched the third best gain at 0.67% while the Russell lagged the others but still gained 0.30%.

Nine of the 10 main sectors moved higher on Friday. The only one that finished in the red was the energy sector and it lost a modest 0.15%.

[hana-code-insert name=’adsense-article’ /]The healthcare sector led the way with a gain of 1.2% and the industrial sector added 1.08% for the second best performance.

These were the only two sectors that gained more than one percent.

My scans produced another positive result on Friday, but the differential between the two lists was the smallest one we have seen in this five-day stretch.

There were 23 names on the bullish list and 19 on the bearish side.

The barometer dropped from 25.4 to 18.1 once these results were added to the calculation.

Today’s trade idea is a second straight bullish one and it is on Microchip Technology (Nasdaq: MCHP).

The company scores a 91 on the EPS rating and an A on the SMR rating system. The company has seen great earnings and sales growth over the last three years and its management efficiency measurements are well above average. 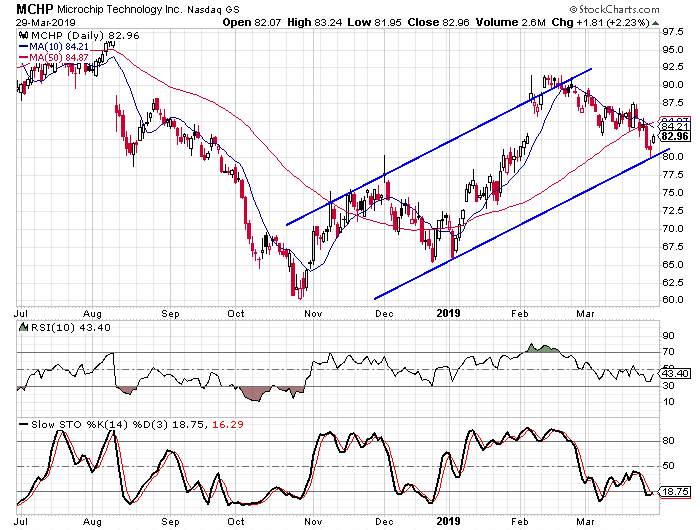 We see on the daily chart that the stock has been moving higher since October and a trend channel has formed that defines the different cycles within the overall trend. The stock jut hit the lower rail of the channel and bounced higher. We also see that the stochastic readings reached oversold territory and made a bullish crossover on Friday.

Buy to open the June $80-strike calls on MCHP at $6.70 or better. These options expire on June 21. The options will double if the stock reaches $93.40. This level is above the February high, but it won’t be anywhere close to the upper rail of the channel. I suggest a target gain of 100% with a stop at $79.90.