After vacillating yesterday morning, stocks caught a bid near lunch time and moved higher in the afternoon. All four of the main indices moved higher on the day with the Russell leading the way with a gain of 0.77%. The other three indices were all grouped closely together with their performances—Dow (+0.36%), S&P (+0.36%) and the Nasdaq (+0.34%).

Eight of the 10 main sectors moved higher on Thursday. Utilities lost 1.2% on the day and the communication services sector lost 0.24% as the only two sectors to lose ground.

[hana-code-insert name=’adsense-article’ /]On the positive side, the materials sector led the way with a gain of 0.99%.

The financial sector had the second best performance by tacking on 0.87%.

The industrial sector continued to add on to Wednesday’s gains with another positive day, adding 0.77%.

My scans produced 49 bullish signals and 21 bearish signals last night and that is a fourth straight night of positive results.

The barometer moved up to 25.4 from 13.7 once these results were added in to the equation.

With the abundance of bullish signals to choose from the trade idea for today is a bullish one. The iShares MSCI Brazil Capped ETF (NYSE: EWZ) is the subject and the fund has benefitted from trade war between the U.S. and China. Two of Brazil’s exports are soybeans and iron ore and with steel and agriculture products being at the center of the trade dispute, Brazil has benefitted. 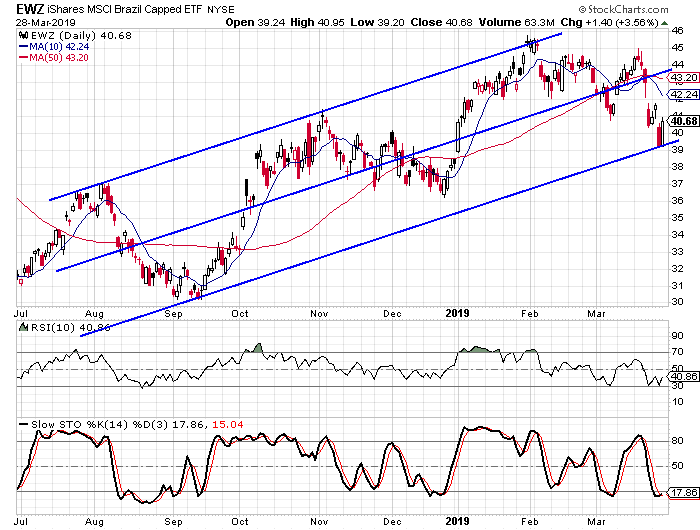 Over the past six months the EWZ is up 22.5% while the S&P is down 3.38%. During that six-month period the fund has formed a trend channel and it just hit the lower rail. The daily stochastic readings made a bullish crossover last night and I look for the stock to make its next upward cycle now.