Nine of the 10 of the main sectors declined on the day with the industrial sector being the only one to gain ground. The sector was up 0.11% and it was a welcome reversal of fortune after the sector has been punished by Boeing’s troubles for the last few weeks.

[hana-code-insert name=’adsense-article’ /]The worst performance came from the healthcare sector with a loss of 0.83%.

The energy sector dropped by 0.74% after the oil inventories report showed an increase instead of a drop. The communication services sector had the third biggest decline at 0.70%.

My scans produced positive results for a third straight night and that is surprising given the selling in the market.

The barometer moved in to positive territory with a reading of 13.7 after eight straight days in negative territory.

Even though there were more bullish signals than bearish ones yesterday, I have a bearish trade idea for you today and it is on Campbell Soup (NYSE: CPB). The company’s fundamentals aren’t terrible with B on the SMR rating, but the EPS rating is only a 38. Earnings have declined by 3% per year over the last three years and they dropped by 23% in the most recent quarter. 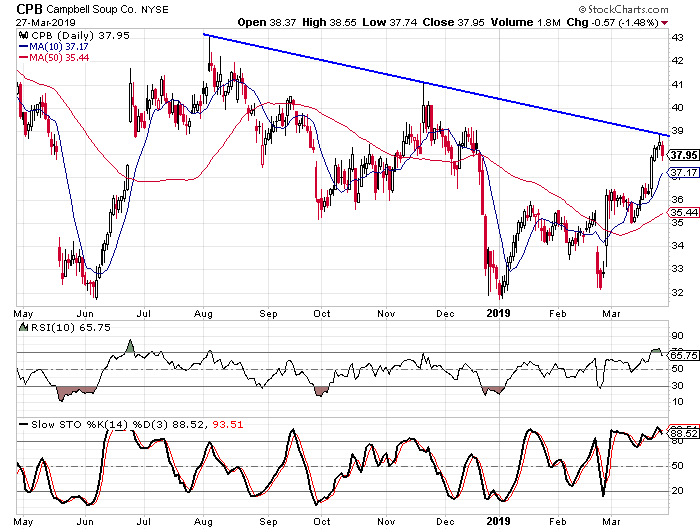 Campbell’s has been trending lower for almost three years now. The stock hit an all-time high in July ’16 at $62.78 and has moved lower ever since. We see on the daily chart how the highs from the last nine months connect nicely to form a downward sloped trend line and the stock just hit it. We also see that the stock was overbought until yesterday.

Buy to open the May $39-strike puts on CPB at $2.50 or better. These options expire on May 17. The options will double if the stock falls to $34.00. The stock fell down to the $32 level back in December and came close in February which means the stock won’t have to drop to a new low for these options to double. I suggest a target gain of 100% with a stop at $39.00.