The market saw some buying pressure enter the picture on Tuesday and that led to gains for all four of the main indices. The Russell led the way for a second straight day with a gain of 0.82%. The S&P rose 0.72% and was followed closely by the Nasdaq with a gain of 0.71%. The Dow lagged the others, but still managed to tack on 0.55% on the day. All four closed well off their morning highs though.

All 10 of the main sectors moved higher on the day and the energy sector jumped by 1.45% and that was the best performance of the bunch. The financial sector finally saw some positive movement and gained 1.15%. Those were the only two sectors that gained over one percent.

Those were the only two sectors that didn’t gain at least 0.5%.

My scans produced positive results for a second straight night with 32 names on the bullish list and nine on the bearish list.

The barometer jumped up sharply, but didn’t quite make it in to positive territory once these results were added in to the equation.

The final reading on Tuesday was -2.2.

Today’s trade idea is a bullish one on CIENA Corp. (NYSE: CIEN). The company scores a 96 on Investor’s Business Daily’s EPS rating system and it gets a C on their SMR ratings. The company saw earnings grow by 120% in the most recent quarter as sales jumped by 20%. The profit margin and ROE are average and that’s what drags down the SMR rating. 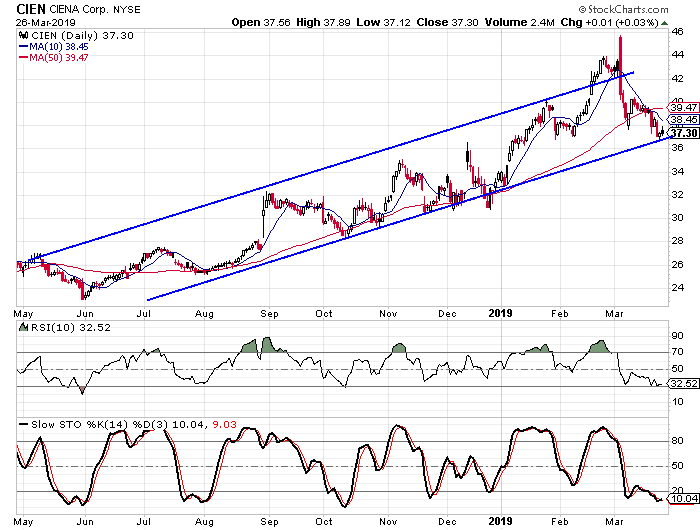 CIENA has been trending higher for the last 10 months and it was moving higher within a trend channel until the stock broke above the upper rail in February. The stock pulled back in March and it touched the lower rail in the last few days. The stochastic readings have been in oversold territory for a few weeks now and they did make a bullish crossover yesterday. The indicators went through a similar stretch in late July and early August before the stock jumped sharply.