The sectors were evenly split as well with five moving higher and five moving lower. The consumer discretionary sector led the way with a gain of 0.59% and it was followed by the industrial sector which tacked on 0.25%.

[hana-code-insert name=’adsense-article’ /]The tech sector was the worst performer with a decline of 0.44%.

The financial sector continued to fall and was the second worst performer on Monday with a loss of 0.39%.

My scans produced a positive skew last night and that was the first positive result in seven trading days.

The barometer jumped from -46.6 to -24.9 once these results were added in to the equation.

There were several stocks on both lists with chart patterns that I liked, but none of them showed the corresponding fundamental ratings that I was hoping for.

Regardless, today’s trade idea is a bullish one on General Motors (NYSE: GM). The company scores a 78 on the EPS rating and that is above average, but the SMR rating is only a C which is average. 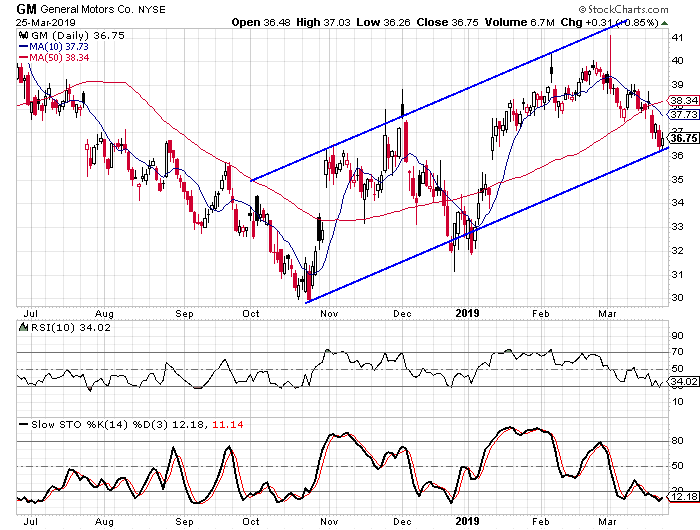 The daily chart shows how the stock has been moving higher since October and a corresponding trend channel has formed. The stock is down near the lower rail currently and it is oversold. The daily stochastic readings made a bullish crossover yesterday and that is similar to the pattern that developed in late December. I look for a similar move this time.