After the big gains on Thursday, the market turned right around and gave all of it back on Friday and then some. Stocks got hit hard after some weak economic data and all four indices saw big declines. The Russell got hit the hardest with a drop of 3.62% and it was followed by the Nasdaq with a loss of 2.5%. The S&P fell 1.9% and the Dow had the smallest loss at 1.77%.

Nine of the 10 sectors fell on Friday, just the opposite of Thursday when nine gained ground. The lone sector to manage a gain on the day was the utilities sector which tacked on 0.72%. With the Fed stating that it won’t raise rates the rest of the year, utilities have become more attractive because of their dividends.

[hana-code-insert name=’adsense-article’ /]The materials sector was the worst performer with a loss of 2.98%.

The sector was impacted by weak manufacturing reports overseas.

The second worst performer was the financial sector which lost 2.76% and it was followed by the energy sector which dropped 2.7%.

My scans seem to have whiplash like the market.

The difference between the two lists on Wednesday was -69.

After jumping up on Thursday, the barometer dropped back down on Friday. The readings over the last three days have been -48, -34.3, and on Friday it was -46.6.

Today’s trade idea is a bearish one and the subject is Noble Energy (NYSE: NBL). The company scores a 29 on IBD’s EPS rating system and it gets a C in the SMR category. The company’s earnings have been flat over the last three years and they were down 63% in the most recent quarter. 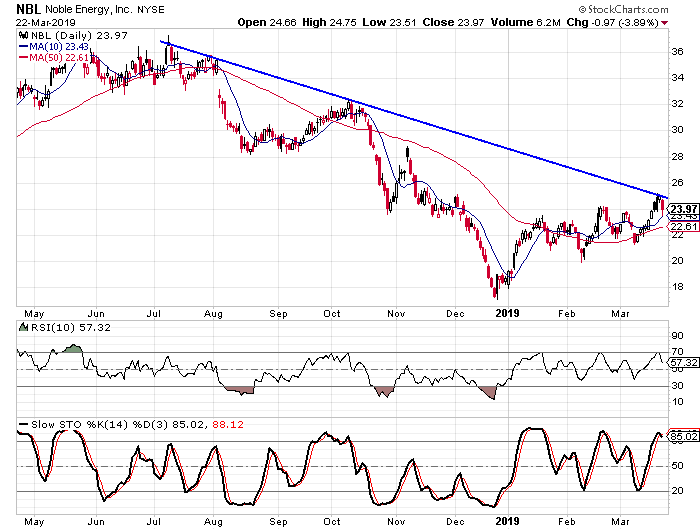 As you can see on the chart, Noble has been declining since last July and there is a trend line connecting the closing highs from the last eight months. The stock just hit this trend line. We see that both the 10-day RSI and stochastics just hit overbought territory and turned lower on Friday. The stochastic readings made a bearish crossover on Friday’s decline.