Stocks carried the upward momentum from last week in to this week and all four indices moved higher on Monday. The Russell led the way with a gain of 0.67% and that much better than the others. The S&P finished with a gain of 0.37% and the Nasdaq tacked on 0.34%. The Dow was once again hurt by Boeing, but it still advanced by 0.25%.

Just as we saw on Friday, seven of the 10 main sectors moved higher on Monday. The energy sector led the way with a gain of 1.39% and it was followed by the financial sector with a gain of 1.01%. These were the only two that gained over one percent, but the consumer discretionary sector and industrial sector both gained 0.97%.

[hana-code-insert name=’adsense-article’ /]The communication services sector was the worst performer with a decline of 0.85% and it was followed by the utilities sector with a loss of 0.38%.

The healthcare sector was the third sector in the red with a loss of 0.15%.

My scans produced a third straight night of negatively skewed results on Monday.

There were 37 names on the bearish list and 11 on the bullish side.

The barometer dipped a little further once these results were added in to the equation, falling from -15.8 to -28.2.

Even though the scans were skewed to the bearish side, today’s trade idea is a bullish one on Monster Beverage (Nasdaq: MNST). The company scores an 83 on the EPS rating and an A on the SMR rating. 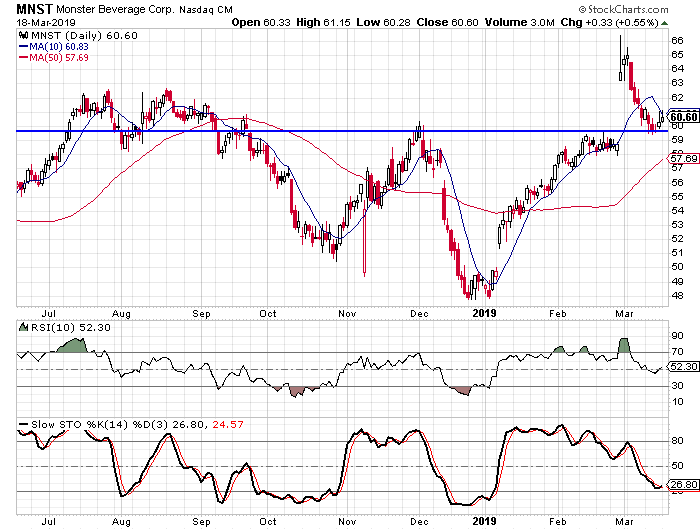 Monster gapped higher on February 28 after it beat earnings expectations. The stock has since pulled back and filled the gap in the chart. The $59.75 area appears to be acting as support now and the stock has turned higher over the last few days. We see also that the daily stochastic readings made a bullish crossover yesterday.

Buy to open the May $60-strike calls on MNST at $3.40 or better. These options expire on May 17. The options will double if the stock reaches $66.80. The stock will have to move above its most recent high for the options to double on an intrinsic basis, but I think it can do just that. I suggest a target gain of 100% with a stop at $59.50.