Stocks moved higher on Friday and that made it three out of five days this past week where all four indices moved higher. For Friday, the Nasdaq led the way with a gain of 0.76%. The Dow and S&P were close in the race for second best performance with gains of 0.54% and 0.50%, respectively. The Russell lagged the others, but it still tacked on 0.25%.

Seven of the 10 main sectors moved higher on Friday with the tech sector leading the way with a gain of 1.21%.

[hana-code-insert name=’adsense-article’ /]The financial sector added 0.70% for the second best gain and the consumer discretionary sector moved up 0.65% for third place.

As for those sectors in the red, the industrial sector was down 0.35% as the worst performer.

The communication services sector fell 0.08% and the energy sector was down 0.04%.

My scans produced a second straight negative result with 45 names on bearish list and four on the bullish list.

The barometer dropped in to negative territory with a reading of -15.8 and that ended a streak of four days in positive territory.

There were several stocks on the bearish list that I liked the chart for a bearish play, but ultimately I chose DowDuPont (NYSE: DWDP) for today’s trade idea. The fundamentals actually pretty good with an EPS rating of 68 and an A on the SMR rating, but the chart trumped the fundamentals in this case. 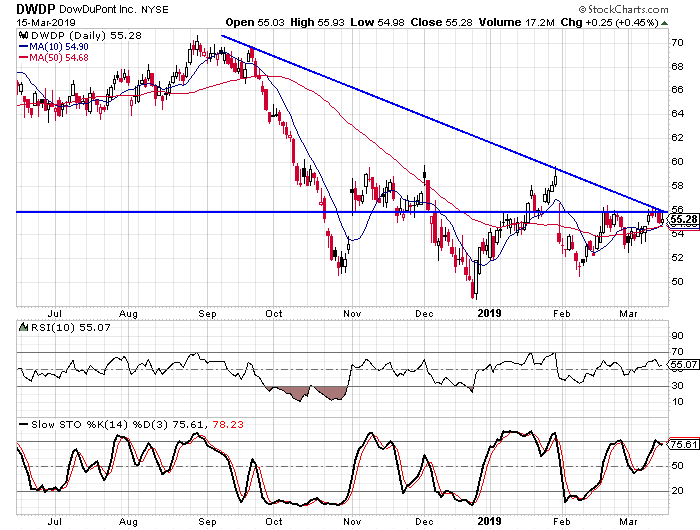 The stock has been trending lower since last September and if we connect the highs from September and January we get a trend line that the stock is hitting now. There is also the resistance at the $56 area which marked the high in February. This acts as a secondary layer of resistance.