I may have jinxed the market yesterday by talking about how it was attempting to counter the five straight down days with five straight up days. Thursday saw the indices meander without much of a push from the bulls or the bears. At the end of the day, three of the four would finish lower with only the Dow (+0.03%) gaining ground. The Russell took the worst loss, but even that was only 0.29%. The Nasdaq lost 0.16% and the S&P fell 0.09%.

The sectors were mixed with seven moving lower and only three moving higher. The worst performance of the day came from the materials sector with a loss of 0.75% and it was followed by the communication services sector with a decline of 0.44%.

[hana-code-insert name=’adsense-article’ /]The financial sector led the way on Thursday with a gain of 0.42%.

It has been quite some time since the financial sector was the leading gainer.

The streak of positive results from my scans came to a halt after four days.

Despite the large number of signals on the bearish side, there weren’t very many scenarios that jumped out at me. There were some poor fundamental ratings, but the charts didn’t support the bearish play. One chart that stood out was the iShares 20+ Year Treasury Bond ETF (Nasdaq: TLT). 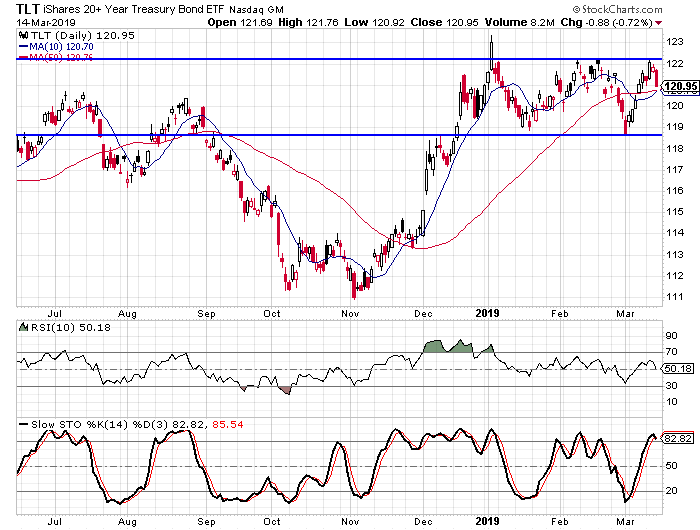 We see on the chart how the fund has struggled at the $122.25 level three times in the last month and a half. The TLT hit that level again earlier this week before turning lower yet again. The daily stochastic readings hit overbought territory and have now made a bearish crossover.