After a string of five straight days of losses last week, the indices are on their way to the opposite this week. Wednesday saw all four indices advance for a third straight day. The Nasdaq and S&P tied for the best performance with both gaining 0.69%. The Dow and the Russell lagged the other two a little, but they managed to climb by 0.58% and 0.47%, respectively.

All 10 of the main sectors were higher on Wednesday, but there were two that stood out. The healthcare sector led the way with a gain of 1.06% and the energy sector was close behind with a gain of 1.01%. These were the only two that gained over one percent.

[hana-code-insert name=’adsense-article’ /]The smallest gain was 0.10% and that belonged to the utilities sector.

The positive 17 difference is the smallest one in the last four days, but it was positive never the less.

The barometer fell a little due to the smaller positive skew.

Despite the positive skew from the scans and the positive reading from the barometer, the trade idea I liked best was a bearish one on Allergan (NYSE: AGN). The company’s fundamentals aren’t terribly, but they also aren’t great. The EPS rating is at 60 and the SMR rating is a C. The company saw earnings and sales decline in the most recent quarterly report. 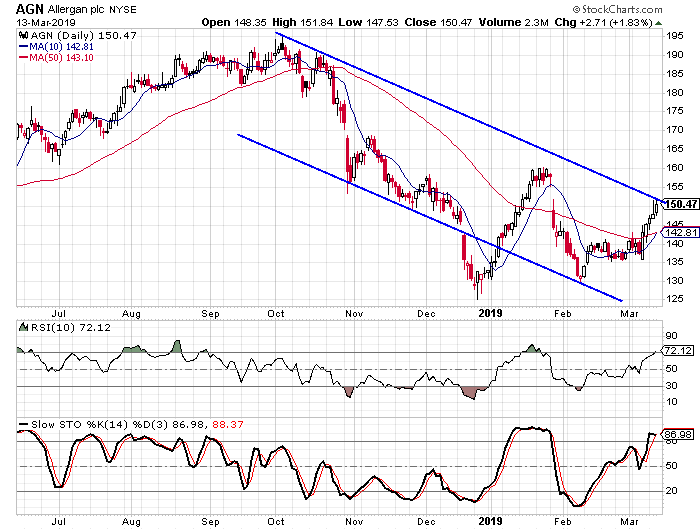 We see on the chart how the stock has been trending lower since October. By connecting the highs from that month with the current level we get a potential upper rail to a channel. The lower rail connects nicely to the lows from October, November, and February. The December low was an outlier.